TV Junkie: A visit to the 'Rules of Engagement' set

Last Spring we were thrilled to speak with Patrick Warburton, star of CBS' "Rules of Engagement". As the show was shooting episodes for this season, we were invited to the set to see how the show gets put together and for a chance to speak with Warburton's co-stars Adhir Kalyan, Oliver Hudson, and Megyn Price.

In addition to interviews, we got some footage of the cast working on the set, doing a pre-shoot for what will be tonight's season premiere episode, airing at 8:30pm on CBS. We hadn't been to the Sony Pictures Studios in Culver City before so it was exciting walking around the maze of enormous box-like structures which housed the sets and facilities. The sets for "Rules of Engagement" are arranged in a long line so that cameras and other equipment as well as the studio audience can be moved along from scene to scene. It reminded us of when Garry Shandling once took advantage of this kind of design by getting into a small car with several of the characters of "It's Garry Shandling's Show" and driving from one set to the next.

It was very much a privilege to see this team work so professionally and so quickly while still getting real laughs from the crew on what is essentially a taped rehearsal. We came away with a much deeper appreciation of what goes into making something funny in a format as established as a multi-camera sitcom. We watched several takes of a scene featuring comedy giants David Spade and Warburton and we're not sure how the director could pick one that was funnier than another. In an environment that is as disjointed as a pre-shoot, going from one unrelated scene to another, it was amazing to see these people just "turn it on" for take after take.

We started off speaking with Adhir Kalyan, who we are big fans of since we first saw him in a multi-episode arc on FX's "Nip/Tuck". He had great energy and was a great spokesperson for the show as he eloquently summarized what they were doing and how he became involved with the show.

Most people are familiar with Oliver Hudson (brother of Kate, son of Goldie Hawn) from his extended stay on "Dawson's Creek" but being horror movie buffs, we knew him better from such fare as Black Christmas, and The Breed, where he does a great job in these action and drama oriented roles. Comedy was new to him as he explained in our interview, which was surprising to us as he is extremely funny in his role as Adam. On the day of our visit he had to do several takes of falling down a set of stairs which showcased his willingness to literally throw himself into physical comedy.

Capping off our visit was a conversation with the charming Megyn Price who graciously gave us a few minutes, literally between takes, to give her experienced perspective on the show. We loved Price as Claudia Finnerty opposite Donal Logue on "Grounded for Life" and her presence on "Rules" was one of the reasons we began tuning in a couple years ago.

The cast weren't able to give us many specific hints about what to expect this season but as you can see in the footage, Jaime Pressly will be involved for at least 1 episode. We're definitely looking forward to seeing what this combination of comedy veterans like Price, Spade, and Warburton and new-to-the-game comedic players Hudson and Kalyan will present us with over the next several months.

"Rules of Engagement" has its fifth season premiere tonight at 8:30pm on CBS. 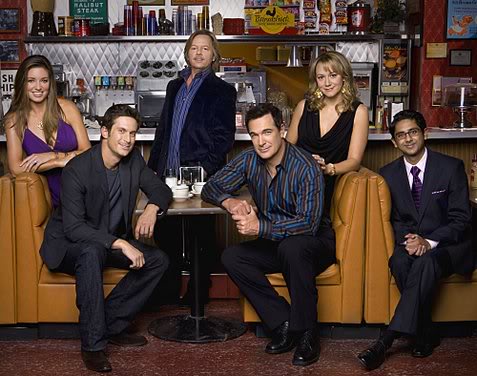 "Rules of Engagement" begins its 5th season tonight at 8:30pm on CBS.