$111 Million in Stimulus Money Given to L.A. has Only Created 55 Jobs 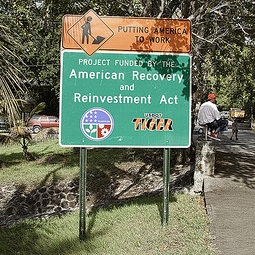 Photo by GenBug via Flickr
More jobs are expected to be created but City Controller Wendy Greuel is disappointed that two departments given $111 million in federal stimulus monney are slow to create and retain jobs. The Department of Public Works has received $70.65 million, resulting in the creation or retention of 45.46 jobs so far. Overall, there should be 238 jobs.

The Department of Transportation was awarded $40.8 million and has created or retained 9 jobs, although there should ultimately be 26.

“I’m disappointed that we’ve only created or retained 55 jobs after receiving $111 million in ARRA funds. With our local unemployment rate over 12% we need to do a better job cutting the red tape and putting Angelenos back to work,” said Greuel, who noted that it did not appear funds were misspent.

"The City needs to do a better job expediting the process and creating jobs," she added. "We’re going to continue to audit how these funds are spent, to ensure that they are expended quickly and correctly."

Gruel says department policies appear to be the problem. One example for both departments was the slow process to award contracts, meaning immediate impact to the economy -- you know, one big goal of the Recovery Act -- is zilch.