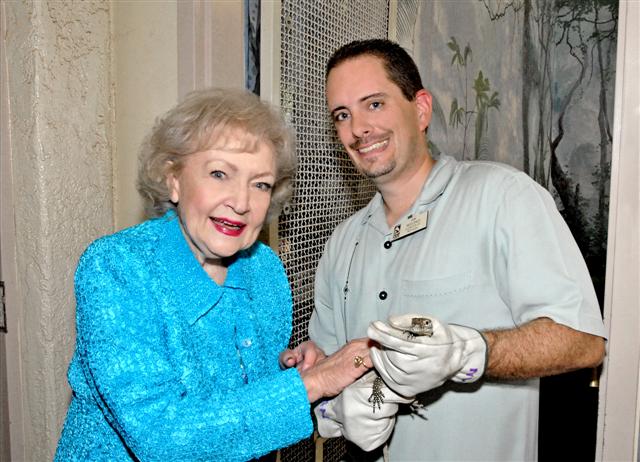 The first of 22 Komodos hatched at the Los Angeles Zoo on August 8th. According to the zoo's press release, "Less than 10 zoos in North America have been able to breed Komodos; this marks the L.A. Zoo’s first success at breeding them." 22 out of the 23 eggs laid in January by Lima, hatched.

The baby komodos will be at home in their newly renovated exhibit in the Winnick Family Children’s Zoo. "The hatchlings are 14 to 20 inches long and weigh about three to four ounces." They better eat their Wheaties, because they are expected to grow up to 9 feet and weigh more than 200 pounds. Komodos are native to only a few islands in Indonesia, "where they forage for snakes, lizards, eggs, carrion, and even large mammals such as deer, wild pigs, horses and water buffalo".

Although Betty White doesn't look nervous, she had better watch her fingers. Not only are Komodo Dragons cannibalistic, they have a taste for celebrity flesh.