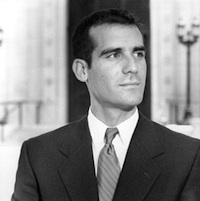 Eric Garcetti
It's been teased for years. Los Angeles City Council President Eric Garcetti will run for Mayor of Los Angeles. That's yet to be seen, but Hollywood seems to like him and his father Gil, a former Los Angeles County District Attorney. For example, a fictional character running for D.A. of Gotham in the viral campaign for The Dark Knight was named Roger Garcetti, and in HBO's "The Wire," Baltimore City Councilmember Tommy Carcetti became mayor.

In his retirement, Gil has taken to the arts, publishing a photography book of women and bicycle in Paris and becoming a consulting producer for the TNT LAPD drama "The Closer," which features Kyra Sedgwick.

Tonight, Garcetti will continue his small acting career and appear as the Mayor of Los Angeles on the show. The episode is about the murder of two paramedics, which leads the police and FBI into a bigger story: there could be a major terrorist attack planned for L.A.

Garcetti, who is actually a Screen Actors Guild member -- he had minor acting roles as a kid -- joined with Mayor Antonio Villaraigosa on "All My Children" earlier this year.

The Closer airs at 9 p.m. tonight. Both Garcettis appeared on the show in July, with Gil in an acting role as the Chief of Police, Eric was in the background.

For the record: an earlier version of this post said the fictional Tommy Carcetti became the District Attorney. He actually became Mayor.