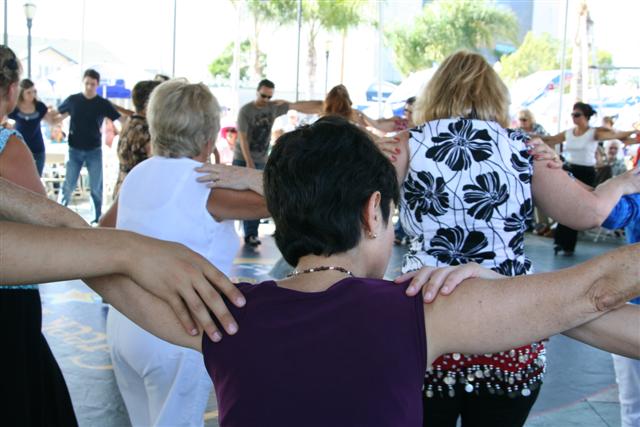 Opa! It's time to sing, to dance, to eat pastries rich with honey at LA's Annual Greek Fest. Once again this year the beautiful St. Sophia Cathedral will host this spectacular event. The cathedral building is open for visitors during the event from 2pm to 9pm, with audio presentations on the hour. Once again Tom and Rita Hanks will serve as the official celebrity sponsors. But for us, the real star of the show are the Loukomathes, Greek doughnuts topped with honey and cinnamon.

Today's events start at 1pm with live Greek music, Greek cooking demonstrations, dance exhibits, a dance workshop, and ending the night at 11pm after the traditional "Charanga Latina" Salsa show. Tomorrow the event begins at 12 noon and closes at 10pm with Charanga Latina.

As for food, there is a new delight everywhere you turn. Vendors outside tempt, but don't overlook the church stand where some of the real treats await not to mention the cookies and doughnuts (Loukomathes) served in the church hall. For those readers not familiar with Greek food, let us give you a few recommendations. Patsitsio is a rich bechamel baked pasta similar to lasagne. Saganaki is a Greek cheese served on fire with a slice of lemon. Yes, on fire. There is also Galaktobouriko, a rich, smooth custard between layers of filo, as well as tons and tons of honey-soaked pastries.

Parking is surprisingly easy, but there is a shuttle if you aren't so lucky. There will also be raffles, children's rides (and maybe a little ouzo. But you didn't hear it from me). Check out LAist's previous coverage.