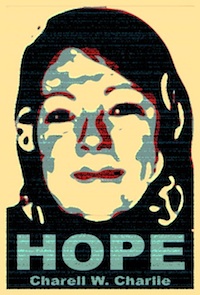 Charell Charlie's "HOPE" image (Facebook)
To counter plans by a Florida pastor to burn copies of the Koran, a local peace activist is organizing a silent protest which calls for people to "Wear a Hijab or Kufi" to show tolerance for those of the Muslim faith.

Whittier Area Peace and Justice Coalition member Charell W. Charlie has put together the event, which will be held Saturday afternoon at The Grove.

Charlie will be joined by members of Women in Black-LA and others from a variety of faiths who will don a head covering (hijab, a headscarf, for women and kufi, a skull cap, for men) and walk around the open-air mall in silent protest.

"We are non-Muslims who plan to wear the hijab or kufi on 9/11 as a gesture to American Muslims that they are full citizens of this country and deserve the same rights as the rest of us. We intend to prove to Muslims around the world that people of peace outnumber those who hate," says Charlie. "Let's stand up and stand out to demonstrate that not all Americans are bigots."