It's Your Civic Duty: Make the Bacon-Wrapped Hot Dog the Official Hot Dog of Los Angeles 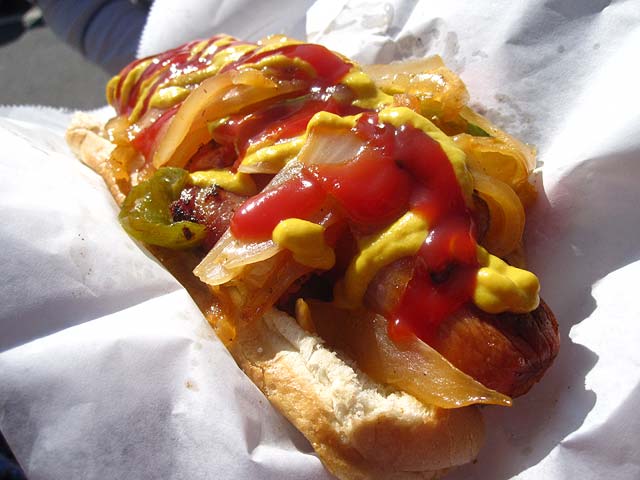 Picture Uncle Sam wagging his finger at you. Now, imagine instead his hand outstretched, bearing a fresh-off-the-grill bacon-wrapped hot dog. He's handing it to you, and, well, if you're carnivorous, you're finding it hard to resist. You want to eat it. It's a matter of civic pride. After all, you're an Angeleno!

Farmer John, the Southern California-based company that introduced the Dodger Dog in 1966, has mounted a campaign to have the Bacon-Wrapped Hot Dog designated as the Official Hot Dog of L.A. After all, they say, "New York has the Dirty Water Dog. Chicago has the Red Hot. Even Baltimore has the Half Smoke." So why can't L.A. get our own dang diggity dog?

What they want from you is your vote, from now until November 2nd. More incentive to vote: "For every signature collected in support of the Bacon Wrapped Hot Dog, FARMER JOHN will donate one pound of food—up to 25,000 pounds—to local food banks, including the Union Rescue Mission Food Bank in downtown Los Angeles."

We're sorry if this leaves veggies and vegans out. "Eeew, gross, hot dogs!" We know, we know, you're tempted to Tweet out and comment as such. You can always make do with our recipe for Vegan "Bacon"-Wrapped "Pigs" in a Blanket, and leave the rest of us to relish (and mustard and onions and...) our Bacon-Wrapped Hot Dogs.