8 Tips One Blogger Learned from a Recent Mugging in Hollywood 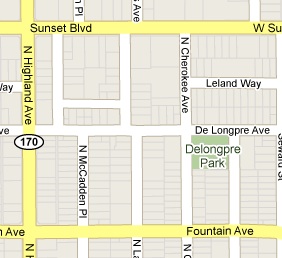 Blogger e*starLA recently moved to Hollywood from Beverly Hills-adjacent. It was a choice, and one partly based on living a life where you can leave your car behind and walk. "From Farmer’s Market on Sundays to the movie theatre, the largest independent music store and Trader Joe’s - I can walk anywhere, and I started to, immediately," she wrote about her neighborhood.

And that's what she was doing on Sunday afternoon, walking near DeLongpre Park when a woman came up from behind her. “Gimme your purse, bitch” she said as she tried to take it. What followed — you really need to read it — was a fight that sounds like none other for a nice weekend day: kicks, punches, chokeholds. E*starLA, luckily, came out victorious as witnesses began to walk up. The suspect fled.

"To the told-you-so’s on my moving into Hollywood from posh Beverly Hills Adjacent: I wouldn’t be deserving of a neighborhood I wasn’t willing to fight for," she said. "I look at it as paying dues early, not a pattern doomed to repeat itself. (Yet.)"

Now e*starLA has some really good tips on preventing this from happening again, or if it does, what can be done. Among them: buy renter’s insurance that covers stuff stolen from off you, and for witnesses, don't just gawk, call the police. The other six tips are definitely worth a read.

As for what the suspect looks like, e*starLA describes her as "darker-skinned and with waist-length dark brown and blonde dreads. 5’6″, 135 lbs (medium build). Orange tank top, jeans and jean shirt."