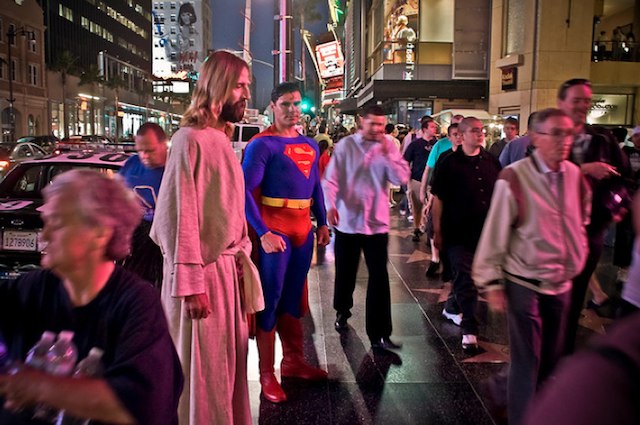 Photo by A.C. Thamer via the LAist Featured Photos pool on Flickr

The group of performers who spend their days and nights on Hollywood Boulevard dressed as characters from comic books, movies, and television staged a small protest yesterday in front of City Hall. Among the "superheroes" present were Christopher Dennis (Superman) and Joe McQueen (The Hulk), who were there to bring attention to the arrest citations issued to them by the LAPD, according to CurbedLA.

This most recent crackdown comes after a group of characters filed suit against the city following their being ousted from the Boulevard by the LAPD. The characters assert that they are just trying to make a living, and that those who behave themselves should be permitted to stroll the street and interact with people willing to give them some cash to take photos with them.

The characters have urged the Hollywood Chamber of Commerce to set up a permitting system, however the organization's President and CEO, Leron Gubler, says that isn't going to happen: The general consensus in the business community is that [Hollywood Boulevard] is better off without the characters."

Currently there are no laws banning the characters, however the LAPD is working to enforce "existing laws" governing "aggressive solicitation and blocking the sidewalk," according to one local officer.

City Hall was in recess yesterday; Dennis, McQueen, and others showed their citations to members of the press.