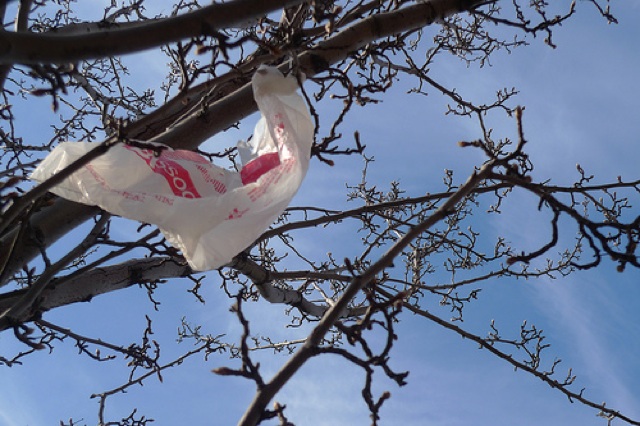 A state bill that sought to ban plastic and other single-use bags from supermarkets and other retailers in California failed to garner approval in a late-night Senate vote Tuesday evening.

Bill author Assemblymember Julia Brownley (D - Santa Monica) and sponsor Heal the Bay's goal with Assembly Bill 1998 was to reduce California's contribution to ocean pollution, including the massively large Great Pacific Garbage Patch, which by some estimates is at least the size of Texas or even the United States. 19 billion single-use bags are used in California each year and an estimated $25 million is spent collecting and disposing of them. Plastic marine-debris is often mistaken for jelly fish by whales, birds and sea turtles who eat it, which could be a fatal move.

“This is a sad day for California,” Brownley said after the vote. “Communities across the state were waiting for the state to adopt a uniform, statewide ban on single-use bags before they adopt their own ordinances. The state failed them."

Here's what the bill would basically have done:

Assemblywoman Julia Brownley, D-Santa Monica, talks with state Senator Rod Wright, D-Inglewood, about her measure on Monday (AP Photo/Rich Pedroncelli)
The State Assembly approved an earlier version of the bill in June. Governor Arnold Schwarzengger then signaled his support. The State Senate, however, did not vote the same, failing to approve it 14 to 21 at about 11:35 p.m. on Tuesday. They had until midnight, the legislative session's end, to decide

A number of Senators stood up and spoke against the bill. "This goes backwards," said Senator Jeff Denham (R - Merced), explaining that producing paper bags would be environmentally disastrous. "Really? This is better for the environment?"

In a tweet, Heal the Bay reminded Denham and other opponents that the bill was not a paper vs. plastic issue, but about all single-use bags.

Senator Mimi Walters (R - Laguna Niguel) was concerned that low income families would suffer the financial burden of purchasing bags. She herself uses 10 bags a week when she shops for her family of six, she said.

An LA Times editorial on Sunday explained: "What few customers realize is that they're already paying for the plastic bags; the cost is built into the price of groceries. If that cost weren't hidden, more consumers would have switched to reusables by now."

The American Chemistry Council, which is supported by companies like Exxon and Dow, fought extremely hard to defeat AB 1998. The plastic industry group hired extra lobbyists, initiated an aggressive robocall campaign and ran more Sacramento-area primetime ads than the current gubernatorial race, said Brownley at a Sunday morning press conference. "This does not happen in Sacramento... it's an unprecedented effort on their part."

Tonight, Brownley was undeterred. "This is an environmental movement that won’t be stopped, even by big-money interests like the American Chemistry Council," she said. "It’s not a matter of if, but a matter of when consumers bring their own bags and become good stewards of the environment.”

Using existing funds, AB 1998 would have also created a grant an loan program to retain jobs in California for the manufacture of reusable, durable plastic bags. It would also extend the already-existing in-store grocery store recycling program for plastic bags.

In the meantime, all will not lost locally. A motion and completed environmental documents to ban plastic bags in unincorporated parts of Los Angeles County is ready to go and can be, in essence, be copied and pasted by local cities. Santa Monica and Manhattan Beach have already committed to passing bans and Los Angeles Mayor Antonio Villaraigosa is in support of his city doing the same.

Related: How to be Plastic Bag Free