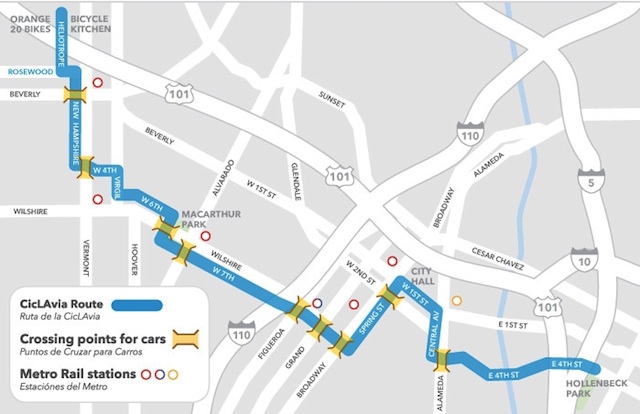 In July, we brought you a map of the proposed map of CicLAvia event, which back then was scheduled for this month. It's now on for October 10th, the same day Santa Monica is looking to do it, and a new map has been released.

If you're not familiar with the Ciclovia concept, which began in Bogota, Columbia, it's a reoccurring event where city officials close down major streets to vehicles and open them up pedestrians and cyclists. A handful of American cities have taken advantage of the concept, including San Francisco, New York and Portland. Check out a video below to get a feel for it.

It's the hope that the local version, called CicLAvia, will also be a reoccurring event. To build buzz, organizers are taking advantage of their 10/10/10 date and doing a series of top 10 lists, such as the top 10 public spaces along the route, top 10 neighborhoods and a fun one twisted into a contest: the top 10 where-along-the-route mystery photos. Good luck on that one!