When it Comes to Walking, L.A. is More Deadly than Other Cities 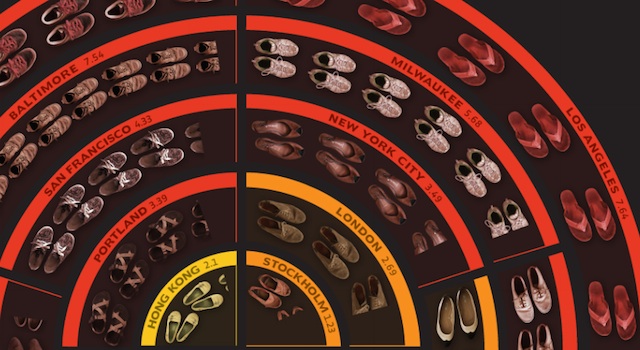 Detail of GOOD Magazine's chart. See it in full and in interactive mode here.

If Los Angeles is going to be the greenest city in the nation, making it walkable should be a major part of that effort. Part of walkability is planning a neighborhood or commercial district with the right mix of amenities and destinations. Another part is safety. Because if walking to the nearby grocery store means putting your life overtly at risk, then you're just going to start driving.

In North America, three out of every 100,000 pedestrians are killed. In Los Angeles that number increases to 7.64.

Those numbers come from GOOD Magazine, which put together the graphic seen partially above and the data is courtesy of The New York City Pedestrian Safety Study & Action Plan.

What New York City found was that their "traffic fatality rate is lower than Copenhagen’s and nearly equal to Amsterdam’s." But there was still a lot of room for improvement -- Portland, London, Tokyo, Berlin and Hong Kong all have fewer deaths per 100,000 people -- and they have already stated their goal: "Reduce traffic fatalities by 50% by 2030."

Another pedestrian safety initiative will occur on Thursday near Cal State Northridge when the LAPD will conduct a crosswalk enforcement operation where plain clothes officers enter a crosswalk to identify motorists who fail to yield to pedestrians' right of way. Those drivers who fail to do so will be cited.

Still, Los Angeles, like many cities, has a long way to go. One example: Here speed limits are being increased on a variety of streets while New York City, which is once again a very differently designed city, will experiment with decreasing neighborhood speed limits to 20 mph.