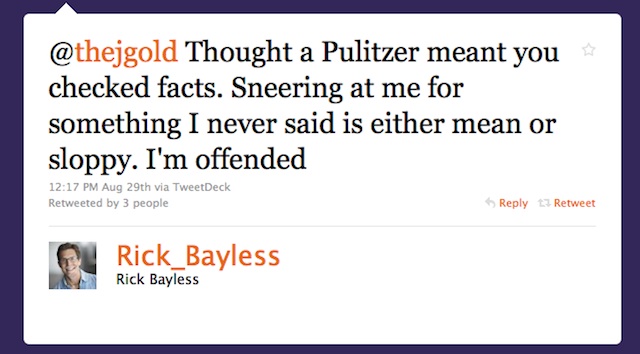 Los Angeles' foodie Twitterati went into a tailspin on Sunday when they caught Chicago-based Top Chef Master Rick Bayless dissing the city's favorite food writing son, Jonathan Gold in a Tweet: "@thejgold Thought a Pulitzer meant you checked facts. Sneering at me for something I never said is either mean or sloppy. I'm offended."

So what's the beef?

Bayless was referring to a post in the OC Weekly, wherein one of their food writers, Gustavo Arellano, had written up Gold's recent visit behind the Orange curtain, to address the CCNMA: Latino Journalists of California. During his talk, Gold took Bayless to task for his somewhat dismissive attitude about Mexican food in Los Angeles and the SoCal area, and for the conceit of thinking he could "introduce Angelinos to 'authentic' Mexican cuisine" via Red O, the posh eatery for which Bayless serves as "consultant."

The first commenter on the OC Weekly post: Bayless himself, who said something along the lines of his subsequent Tweet, calling Gold out for misquoting, and to some extent, misrepresenting, him.

The problem--and perhaps, the drama--is multifold, however. Bayless' relationship to Red O has always been along a gray line; the level of his involvement varies in interpretation from a touch to a proprietor. It's not listed as one of his restaurants on his own website, though on my opening week visit--the first of my two--he was making the rounds of the tables, accepting congratulations for his launch. (The Red O website says it's "Mexican Cuisine by Rick Bayless.") Eager to play up the involvement of the high-profile chef angle, from press release to press mention, Red O has easily become synonymous with Bayless. 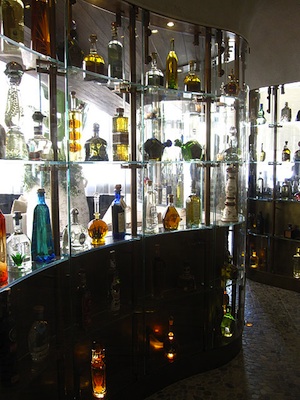 What has the commenters on the OC Weekly post, and other peanut gallery dwellers online and on Twitter up in arms is the contention about what is "authentic" Mexican food, where it can be found, and who can--or does--make it. Bayless is, from one camp, lauded as the culinary emissary from Mexico who showed fearful Anglo-Americans that "real" Mexican food was okay, via his PBS show, cookbooks, and Chicago restaurants. (And, hey, bonus, he's at Burger King, too!) The other camp, however, decries Bayless as a sham, posturing for the sake of a buck and popularity, and resent his documented take on L.A.'s Mexican cuisine scene as being "bland" or just "taqueria" focused.

So really, it's about what Bayless knows, or doesn't know, about Los Angeles. Before Red O made its sparkly, be-ribboned debut, Bayless admitted he hadn't spent time in L.A. in 15 years. Now he's been here for Red O, doing whatever it is he actually is doing for it (taking the credit, but doing very little of the work, is one theory).

But this creates, unfortunately, another divide: Is Red O fundamentally a good restaurant?

Well, it has door hosts that drive away customers. The LA Times' S. Irene Virbila gives it 3 stars, in a review that seems to give Bayless the lion's share of attention, and credit, for its genius: "Red O is a Mexican restaurant, the first showcase outside Chicago for chef Rick Bayless' gutsy regional cuisine," etc.

However, not everyone was charmed. Blogger Bill Esparza calls Red O the "ultimate palace of pretense," citing the dishes' anachronistic takes on the "real" items. This month's Los Angeles Magazine features a negative review from critic Patric Kuh, who puns on its name, calling for a "redo."

Back to the writer and the chef, who drew their respective swords for a potential clashing this weekend. In a small writeup for the LA Weekly published in June, Gold cautions diners that those expecting the same kind of Bayless experience from Topolobampo in Chicago at Red O will be disappointed. The food is "bland" or "timid," though some dishes are "delicious," despite being "untraditional."

A tangle of trouble between expectation and execution, an age-old tension about the relevance of food's authenticity, and the murkiness within which Bayless is tied to Red O make this a complicated battle. The lines are drawn, and drawn tautly. On the record, Bayless has said things that make his own defense seem shallow, like on KCRW or NBC.

Ultimately, Twitter and the blogosphere as battlefield, should a battlefield even be apropos in the first place, is a curious choice for the Chef and the Critic. Hype breeds hype, as this "feud" proved, albeit for just a brief couple of days. "@Rick_Bayless and I have kissed and made up, I think. Further thoughts will have to wait for the full review," Tweeted Jonathan Gold on Monday. Bayless concurred via a Re-Tweet, with a smiling emoticon, shortly after.

Somehow I don't think everyone else arguing the case is so easily appeased. So while we wait for our reservation to come up at Red O, or to find the next great local "authentic" Mexican restaurant, respectively...we'll await the next chapter in this ongoing saga.