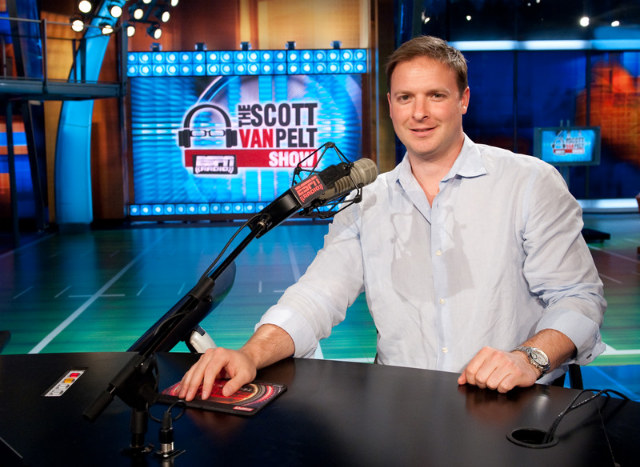 Despite what you may have read on Wikipedia, Ryen Russillo is not a native of Compton or Inglewood. Russillo can, however, be heard in Compton, Inglewood and throughout the area weekdays 10 a.m. to 1 p.m. on AM 830 KLAA co-hosting "The Scott Van Pelt Show."

The duo of Van Pelt and Russillo have put together a show that is refreshingly different from what you've come to expect from sports talk radio; it's informative, entertaining, hilarious and their knowledge of old school hip-hop just might shock you. The SVP Show, which began in the summer of 2009, has successfully picked up numerous additional markets, like LA, and has even expanded to a three-hour show.

We think Ryen is good, really good, but don't just take our word for it. When the guy whose name is on the show was asked about his co-host in late 2009, Van Pelt told The Boston Globe “The minute I heard him, I listened and I stayed listening.’’ Van Pelt, who can be seen most weeknights anchoring ESPN's flagship show — SportsCenter added, “In this business, that’s the best endorsement you can give.’’

LAist had the chance to exchange emails with Russillo, who is actually a native of Martha's Vineyard, MA, to discuss Van Pelt's talents, Lakers fans' sensitivity, USC's future, Del the Funky Homosapien's ability to rap circles around anyone and a whole lot more. Additionally, we may or may not get into what goes on after-hours in Jeremy Shockey's Las Vegas hotel room. As an added bonus, Ryen manages to go third person on us while talking about how much "Fight On" used to fire him up.

Unlike most sports talk radio tandems, you and Scott seem to see eye-to-eye on pretty much everything but "Jersey Shore." Would you say that the friendlier, laid back tone of the show has been a major factor in the success of the show?
If we were to pitch the show as "Hey, we are going to agree on everything" I don't think anyone would have signed off on that. There was some concern that we might be "too similar" when ESPN was trying to figure out who to put with SVP. We probably agree on too much but our opinions are honest, what we say on the air is exactly how we feel about a subject. Both Van Pelt and I watch a ton of games, do our homework so we both respect each others opinions. There has never been a show where we decided ahead of time who was going to play what "role" on that days show, which too many shows do. After a while the listener figures it out.

The bottom of the hour segments, which are my favorite, tend to veer away from sports and into areas like pop culture, video games, guy stuff and offbeat news. Do you include segments like these because it's a reflection of your interests outside of sports or a reflection of how sports talk radio has evolved into more of men's interest radio?
It is both. Van Pelt is the second funniest person at ESPN, behind only TJ Quinn, so to only focus on sports would be a waste of his talents. The show sounds younger than the rest of the lineup. When we tell video game stories we get a few emails from listeners calling us losers, which may be true, but the listeners we gear the show towards love it. We could do a whole show on some of these stupid topics.

The most popular segment of the past year was whether or not a guy could survive fighting a wolf wearing only a catchers mask and chest protector.

It took me a long time to figure it out but if sports talk radio was just about knowing stuff I'd be the highest paid host in the country, but you have to be entertaining and mix in some topics that show some personality.

Who has been your favorite guest on the show?
Jeremy Shockey told a story about how when he used to get after it in Vegas he would go back to his room and do crunches and push-ups to sweat out the booze.

I respect the hell out of that.

The Matt Damon interview has become somewhat famous, Van Pelt and I did half the interview in Boston accents and I finished by commenting on something and telling Damon "it's not your fault" a bunch of times. He actually seemed to enjoy it.

Why do you think there's so much interest in what goes on behind the scenes at ESPN? A recent example of this was the amount of attention that the killed "LeBron in Las Vegas" story received from other outlets.
People love to think that there is this secret room on the campus of ESPN and it's where the suits plot out who we will protect and who we will try to take down. It's not like that, I have never been told "hey we think you should think this because it is good for business" So in the case of the Lebron article, if there is something that looks like proof of ESPN protecting someone people will believe it and spread the word.

Since you're also the host of the "NBA Today Podcast" and this is LAist, I thought I'd ask a couple Kobe Bryant questions: After "The Decision" some Lakers fans I know were writing on Twitter that this somehow helped Kobe's image/legacy. Do you agree? Do you think LeBron James has somehow helped Kobe? Has LeBron replaced Kobe as the league's biggest villain?
Lakers fans are way too sensitive about Kobe's status in the game. I guess some of it comes from the fact that he keeps winning while the rest of the basketball world anoints Lebron as the best player.

Winning is the only thing that helps Kobe's legacy. Outside of LA no one likes him, some of it has to do with Colorado but he is an unlikeable player if he's going against your team.

What's worse, leaving your hometown as a free agent, or spending a summer demanding to be traded? Both suck for fans, but it has more to do with the increasing entitlement of the NBA star.

Bottom line, none of this really matters. I'd take Kobe on my team everyday of the week, he is one of the greatest players I have ever seen.

You also host College GameDay on ESPN Radio, which gives you the chance to go on the road. Where does USC rank among your favorite college football atmospheres?
It's not fair to compare it to any other college atmosphere because it isn't like anywhere else I have been. The sidelines are a scene, I love going there, I'm going to miss the visits with Pete Carroll and watching the walk-throughs, I've never seen a looser bunch of football players ever. We went out on campus a couple of years ago, we definitely didn't fit in, you could almost call it awkward, one girl asked me if I was in town for parents weekend (I was 33 at the time), in the south they love ESPN around, in LA, even on campus no one cared, it was actually kind of funny.

Next time I'm in town I'm going to be wearing the most expensive, aggressive t-shirt I can get my hands on, so look out.

Two years from now, do you think USC will be looking up at Oregon as the perennial favorite in the Pac-10?
Yes, sports are cyclical, and in the moment it seems hard to go against USC, but losing those scholarships is a huge deal. I have no idea if Kiffin can coach, despite the fact that he has had and NFL job and two great college jobs, he's either the luckiest guy in the world or a ninja.

USC fans still have the best fight song in the business, there was a time a younger Ryen Russillo was known to blare it on 11 and tackle my roommates late at night. They soon became ex-roommates.

On a typical commute into work, would we find you listening to your ESPN Radio colleagues or some Del the Funky Homosapien?
You have done your homework. I listen to a ton of ESPN radio, it can help me get a read on the topics for the day, but when it comes to rhymes no one is better than Del.

I have never understood why Del isn't more appreciated, I guess he never fell into a category, but he can put together entire lines that match up. Jay-Z has been telling us how sweet his life is for a decade, he's good, but how about a new topic? Del runs circles around these guys, and he isn't playing some character. Snoop with Katy Perry? That's not the same guy that did "Gz's up Hoes down" is it? I don't think Del will go from rapper to star of "Are we There Yet?"

On the show you guys will often quote hip-hop lyrics. What's one hip-hop lyric you've yet to quote but would love to use on the show some time?
"I kick more game than a crackhead from Hempstead, my styles are milk, man, you'd think that i was breast fed." -The Five Foot Assassin

Update: Ryen revealed on the show today that he is on Twitter (@ryenarussillo) and strives to have the most followers of anyone who has never tweeted. Follow him if you'd like to see him reach this accomplishment, but don't expect any tweets.