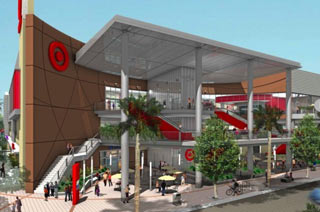 Design plans for the Sunset & Western Target project (via CurbedLA
Target is not just taking heat for its large political donation to an anti-gay candidate, its plan to bring a store to Hollywood and Western has drawn enough fire that it's going back to the drawing board, despite approval by the L.A. City Council in June. Facing lawsuits, the company will develop en environmental impact report (EIR), which was never done for the 74-foot store at Hollywood and Western, according to Curbed LA, which digs deep into the issue.

The new store, which when it happens will bring jobs to the area, was supposed to break ground later this year. That won't likely happen until at least a year and some change from now.