Installation of Gates at Metro Stations Completed, but is it a Boondoggle? 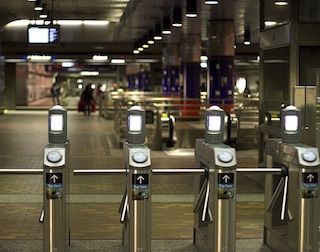 Photo via Metro
Metro officially announced on Friday that gates at rail stations have been completed and that at some date — who knows, really — to be they will be locked, meaning the system is basically an honor system (and how often do you encounter Sheriff's Deputy personnel checking tickets these days?). Completion actually took place a month ago, but the announcement could have been timed to put some facts out before the Daily News ran a Sunday feature about the $46 million project.

"At this point, the best thing they could do would be to totally abandon the program, chock it up to a bad idea and just stop throwing more money at it," Tom Rubin, a veteran transit consultant and former chief financial officer for Metro's predecessor agency, told the paper. In total, the TAP project, which is meant to standardize transit passes in Los Angeles County, has cost $154 million over the years.

"Chucking Metro’s TAP smart card fare program as some critics suggest is like throwing the baby out with the bath water," Metro Chief Communications Officer Matt Raymond said today in reply to the article on the agency's blog. "TAP is working as evidenced by more than 15 million transactions a month. Customers like it because they can load their cards online, replace their fare value if they lose their cards, it speeds boardings and, eventually, will lead to seamless travel on a multitude of transit carriers in LA County."

Raymond added that gates are only one "small part" of the TAP program, which will yield detailed ridership data to someday provide better service.