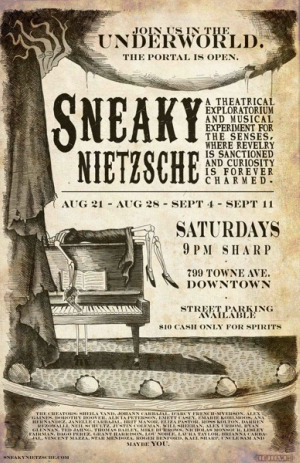 Sneaky Nietzsche, a collaborative and interactive theatre project, enjoys its world premiere today in downtown Los Angeles. With a burlesque dance troupe, homebrew beer, actors and a musical concert "performed by a fictional band of creatures," audience members can expect to be immersed in an "urban forest underworld" according to director Sheila Vand. Fanciful and deeply imaginative, this show is not to be missed.

Vand began work on Sneaky Nietzsche about a year ago, using composer Johann Carbajal's music as a starting point. As the concept grew, so did the group of artists committed to bringing the project to life. Many of these collaborators came from UCLA, where Vand studied theatre; others heard about the project elsewhere and were encouraged to come on board.

The 34 artists in the ensemble had to negotiate a common vision as well as work with the six-thousand square foot downtown space that serves as stage. Sneaky Nietzsche defies definitions; Vand is adamant that "this is not a play and more than a concert...more than just sight and sound." Seemingly unlike anything else in the LA theatre or music scene right now, it will be a treat to discover just what this project really is come Saturday eve.