When Sprinklers are Used to Change: L.A.'s Water Conservation Ordinance Heads to Mayor 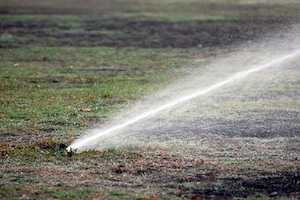 Photo by Robbie via LAist Featured Photos on Flickr
The L.A. City Council today approved changes to the city's water conservation ordinance that limits when lawn watering can take place.

The revision comes in light of a report that concluded current conservation efforts caused a series of water main breaks last year.

The rules should be easy to follow, but they do need some explanation. Via the LADWP:

Under the revised Ordinance, customers whose street addresses end with an odd number - 1, 3, 5, 7 or 9 - will be permitted to use their sprinkler systems on Mondays, Wednesdays and Fridays, before 9 a.m. and after 4 p.m. Customers whose addresses end in even numbers - 0, 2, 4, 6, or 8 - will be permitted to do so on Tuesdays, Thursdays and Sundays, before 9 a.m. and after 4 p.m. Addresses ending in fractions will be treated as whole numbers and observe the same day restrictions as others on their same side of the street, (ie: 4321 ½ is regarded as 4321, an odd-numbered address.)

Sprinkler time limits will be based on the type of nozzle used. Spray head sprinklers and bubblers, which are non-conserving models and are common in most landscapes, will be limited to 8 minutes per cycle and one cycle per day per watering station. Rotors and multi-stream rotary heads will be allowed 15 minutes per cycle and up to two cycles per day per watering station.

Additionally, watering is only allowed before 9 a.m. and after 4 p.m., even if it's a household's watering day. Hand watering with garden hoses is allowed any day of the week within those time restrictions, but only if they are fitted with a shut-off nozzle.

The approved ordinance now heads to Mayor Antonio Villaraigosa for his signature. If signed, the revised law will go into effect upon publication about a week later.