After Obama Traffic Hell, Some Residents Want an Investigation 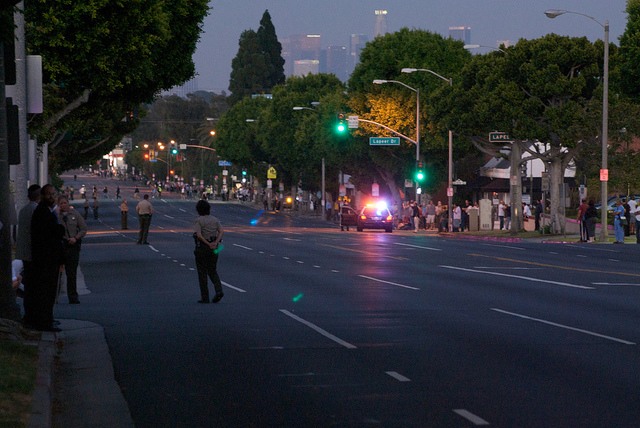 Olympic Boulevard was free and clear of traffic, causing traffic throughout the Westside | Photo by jsteel2005 via LAist Featured Photos on Flickr

The LA Times says some residents want an investigation into last night's epic rush hour traffic mess, but one LAist commenter might be jokingly on to something. "Somehow, I think [L.A. Mayor Antonio] Villaraigosa is behind this; to illustrate how badly we need federal funding for the 30/10 subway projects." 30/10, which is dependent on multi-billion dollar bridge loan from the feds, would bring the region 12 transit projects in 10 years. The White House, in fact has already signaled support.

That same commenter, named meltdowntown, however, highlighted how bad traffic really got. "Left work at 3, wasn't able to board a bus till 4:45, & got home at 9 THANKS TO OBAMA IN LA." If it's too early to do the math, that's a six hour commute.

But on a day when Villaraigosa held his bicycle summit, one cyclist commenting on LAist's Facebook page didn't see the big deal. "Was riding my bicycle to work, passing a whole lot of traffic, when I got stopped at Olympic and San Vicente. Pulled over, saw the motorcade pass by," he said. "It was so exciting to see the president's huge entourage. Lame having to hear all the whiners. Traffic in LA? What's new?"

Many were angry because the traffic was not caused by U.S. business, but for a fundraiser (it raised $1 million, by the way). Others suggested going east of La Cienega was really the problem.