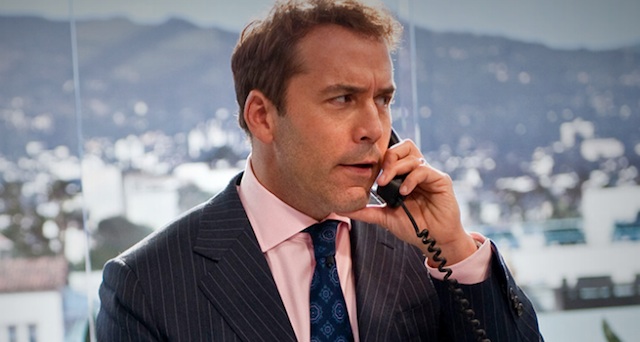 HBO's "Entourage" has been throwing around topical Los Angeles references all season and last night it all came to a head (If you haven't seen Sunday night's episode, be warned, there are spoilers!).

While there's real world talk about bringing a football team to downtown Los Angeles, NFL head honchos in the show picked super agent Ari Gold to make it happen. That was until Deadline Hollywood blogger Anna — they didn't use Nikki Finke's real name, but had Carrie Fisher play her or one of her writers — got a hold of taped transcripts that showed the true Gold. The headline read: "EXCLUSIVE: GOLD TO STAFF — 'YOU'RE ALL C—NTS AND C—-SUCKERS!'" (In real life, Ari Emanuel, the inspiration for Gold, is no stranger to Finke)

That didn't bode well for the NFL. Dallas Cowboys' Jerry Jones, who played himself, called Gold to tell him "the NFL doesn't do scandals." Deal off. Sorry, Los Angeles -- at least for now.

Meanwhile, Turtle has been using Vince to promote his girlfriend's family Tequila brand and promised Randy -- "I'm ground zero for breaking product in Hollywood" -- at Gil Turner's Fine Wines and Spirits 50 cases. While, yes, Gil Turner's is an old-school liquor store in West Hollywood on Sunset at Doheny, "Entourage" used the Liqour Locker a couple miles down Sunset near Crescent Heights.

For those who are fans of the show and missed the news last week, "Entourage" will see its last season next Summer.