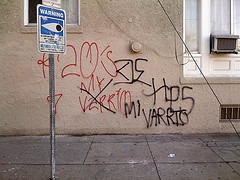 Photo by cyan79 via LAist Featured Photos on Flickr
Word around city hall is that the Mayor Antonio Villaraigosa's office has been concerned with today's release of the Spot.Us report from WitnessLA that digs deep and analyzes the $26 million spent on gang reduction and youth development. Perhaps with good reason.

Last month City Controller Wendy Greuel mostly gave praise to the program, but criticized one of the most important factors: evaluation. But Celeste Fremon of WitnessLA said in an e-mail to LAist that "the problem is not with an inadequate $500,000 evaluation of the programs. The problem is with the programs themselves—-in a big way."

In part one of the series, writer Matthew Fleischer looks into prevention, specifically how at-risk youth are identified, which has gotten to be quite a process. It's called the Youth Services Eligibility Tool (YSET), which is "a lengthy questionnaire designed by a team of experts at the University of Southern California."

In theory, the YSET gauges which children are most likely to be headed for gang membership based on nine “risk factors.” In other words, instead of judging a kid by his or her tattoos or behavior at school, the test isolates a set of psycho-social components that may lead to future gang membership; home life, past trauma, drug use and general mental health are among those taken into consideration

The question is if YSET actually works and brings in truly at-risk kids. Critics say the self-reporting test is faulty. “The fact is, middle school kids lie,” said Jorja Leap, a gang expert, researcher at UCLA and a former one-year consultant to L.A. County Sheriff Lee Baca on gang prevention and intervention. “How many kids do you know that would implicate themselves for marijuana or heroin use?"

Part two of the series later this month will focus on a completely different set of problems with the Mayor's gang program: intervention.

For the Record: An earlier version of this post stated that Jorja Leap was a senior policy advisor for Sheriff Lee Baca.