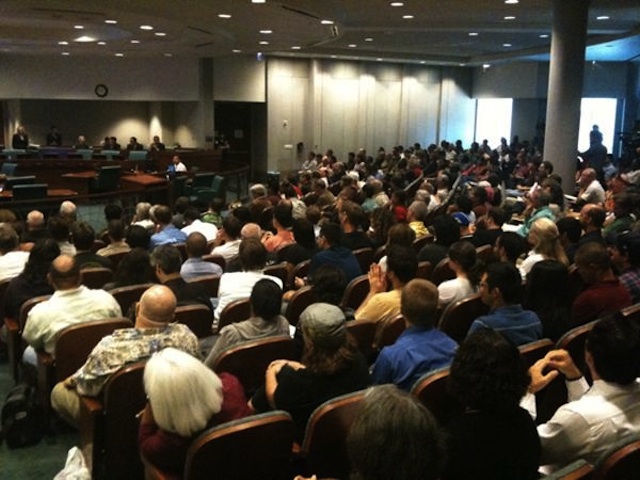 This morning's bicycle summit organized by Mayor Antonio Villaraigosa, who was recently spun into a bicycle advocate after a recent cycling incident that left him with a shattered elbow, started off with a laugh. Former Mayor Richard Riordan presented Villaraigosa with training wheels. But it was only a bittersweet moment as news spread that a cyclist died in the San Fernando Valley this morning.

Hundreds of cyclists packed the Metro Board room this morning where the two-hour summit was held to talk about a variety of issues. And everyone was tweeting up a storm, including the Mayor, L.A. Department of Transportation General Manager Rita Robinson, the L.A. County Bicycle Coalition, L.A. City Bicycle Advisory Committee member Joe Linton, community activist and city council candidate Stephen Box, cyclist activist Alex Thompson, Ross X of @dudeonbike and blogger Gary Kavanagh. The following information is collated from them.

Topics covered included the draft bicycle plan, cicLAvia, a three-foot passing law and helmets. The latter confused many after Villaraigosa announced support for a law that would make helmets mandatory for all cyclists. "I use a helmet but I think a legal mandate is absolutely the wrong move, and not backed by precedents in European successes," tweeted Kavanagh.

A cyclist known as Roadblock pointed out that one of the world's cycling capitols, Copenhagen, doesn't require helmets. Box, who tagged his tweets with "MayoralBS," was bemused that Villaraigosa focused on helmets instead of hit and run laws, speed limits and other issues. "Mayor focusses on cyclists' behavior, cyclists ask him to focus on motorists' behavior," he tweeted.

But it was Councilmember and L.A. Transportation Committee chair Bill Rosendahl who showed up and announced his support for a law that would have drivers pass cyclists by three feet on the road. That idea garnered applause from the audience and agreement from Villaraigosa. Rosendahl also called for creating private cause of action for cyclists involved in collisions.

In regards to the draft bicycle plan, Villaraigosa said he wanted a city- & neighborhood-wide bike network. Robinson said they will commit staff to fully implement the plan, which would bring over 1,600 miles of bikeways to the city at the rate of around 200 miles every five years. But as Road Block said, the city is already missing out on the opportunity to implement the current bicycle plan from 1996 by not keeping main streets in tip top shape.

Villaraigosa saw the criticism as dialogue, calling it "passion and engagement." He said "changes are coming for cyclists in L.A."

Cyclists sure hope so, but they want meetings like today to occur more often than just once a year and a bicycle plan that will work, be implemented and respected. No date is set for another summit, but Villaraigosa plans to be riding on October 10th during L.A.'s first cicLAvia, where miles of public streets will be closed to motorized traffic and handed over to bicycles (it was previously scheduled for September). Villaraigosa said he was frustrated with the bureaucracy making it happen, but said it should be a permanent thing. And it just might: in some places, the event happens weekly.