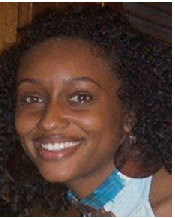 Mitrice Richardson
Sheriff authorities and the coroner’s office have announced an emergency press conference this morning about Mitrice Richardson, the woman who has been missing for about a year after being released from the Lost Hills Sheriff's Station in Agoura Hills. Although there will be no on-the-record comment until the 9:30 a.m. event, remains found earlier this week in a steep canyon have been confirmed as Richardson's, according to various news sources. Park rangers found her while checking for marijuana plants in a former grow field.

Richardson went missing nearly a year ago after an arrest in Malibu, stemming from sheriff's deputies arriving when she didn't pay her $89 bill at a restaurant. They subsequently found a small about of marijuana in her car and booked her. She was released early the next morning with no car or cell phone. Save for a few apparent sightings of her alongside mountain roads, she was never seen again.

Her parents said she shouldn't have been released citing her reported bizarre behavior at the restaurant — claiming she was from Mars and speaking her own language. Sheriff's officials say she seemed fine when she left the station.