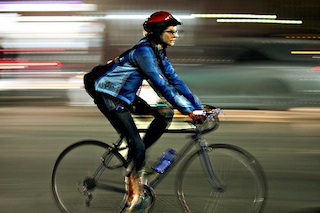 Ayla Stern
A female presence on L.A.'s Bicycle Advisory Committee, the city's official bicycle board, has been missing for a good number of years, something that even sitting members had complained about. That changed today when City Councilmember Paul Krekorian appointed cyclist Ayla Stern of Sherman Oaks to the board.

"Ayla Stern is a dedicated cyclist who has made the often-challenging choice of living in Los Angeles car-free," Krekorian said in a statement. "Ms. Stern has advocated for improved bicycle access throughout the San Fernando Valley while also working to ensure public safety for women cyclists. She is an effective collaborator with a community-minded approach to policy analysis and a talent for educating the public on bike issues. She will be a great addition to the BAC and a strong and effective voice for the city’s bicyclists.”

In the past, Stern has worked with the Valley Glen Neighborhood Council's Public Safety Committee and The Valley Bikery.