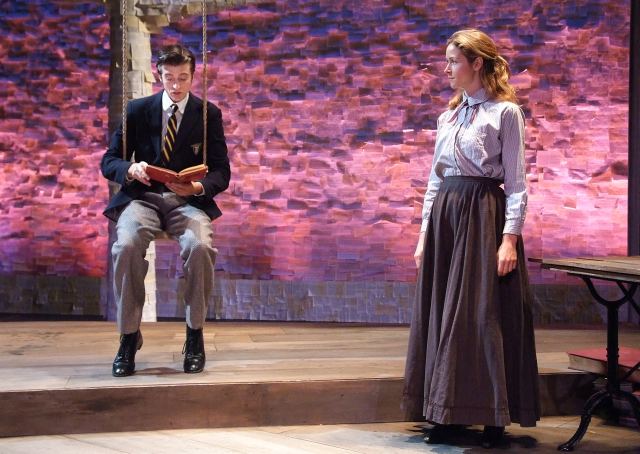 - by Terry Morgan for LAist

The world premiere of Moby Pomerance’s The Good Book of Pedantry and Wonder at Boston Court Performing Arts Center is a rare thing—a new play that is already superb which receives a stunning and satisfying staging. You’d be surprised how infrequently those two things occur simultaneously, but it’s happened here in a felicitous co-production by Theatre @ Boston Court and Circle X Theatre Company.

Pomerance’s writing provides a veritable torrent of wit and erudition that recalls Oscar Wilde in a non-frivolous mode. Director John Langs, well respected for the smart recent history of The Sequence at Boston Court and a revelatory Brothers Karamazov at Circle X, does similar wonders here, getting impressive performances from an outstanding cast. This is exciting, newly forged theater gold, and it’s one of the best plays of the year.

It’s 1880s England, and the future Oxford English Dictionary--still countless definitions on small pieces of paper filling myriad shelves--is being composed and compiled in a garden shed. Scholar James Murray (John Getz) has taken over the endless task, and his current staff is down to two people: the hungry-for-respect Smythic (Time Winters) and Murray’s brilliant but bitter daughter, Jane (Melanie Lora). James, described as “older than Moses and more cantankerous,” still has a formidable mind and no lack of bombast, but the more stable Jane has really been running things for a long time now, and is angry about how life has trapped her. When her long-gone older brother Paul (Ryan Welsh) unexpectedly returns home for his first visit in almost a decade, Jane is genuinely thrilled to see him, for more than one reason.

Lora is dazzling, displaying verbal dexterity and delivering emotional fireworks, all of which covers up Jane’s hidden decency. It’s an amazing, virtuoso performance. Getz is equally grand as a great, difficult man of letters whose fire is beginning to sputter, and he brings both subtlety and brash energy to the role. Welsh excels with the tricky role of Paul, convincingly torn between duty and self-preservation, particularly affecting in a scene in which son and father finally exchange respect for each other’s differing vision of the world.

Winters is hilarious as the increasingly angry Smythic, channeling any number of put-upon Monty Python clerks, but he’s also heartbreaking in a late scene when he finally confesses his true feelings. Travis Michael Holder pulls off the nice trick of starting off as blusteringly imperious and ending up as funny and endearing as the unfortunate Wynchell. Henry Todd Ostendorf is convincing and sympathetic as the confused lover Owen, and Gillian Doyle is slyly amusing as Murray’s foil, the boarding house owner Mrs. Yarrow, but both roles are a bit underwritten, the play’s only real flaw.

Langs’ pacing is excellent, and his focus on performance—making sure the script’s literate wit and moments of serious drama are each fully developed and interwoven seamlessly—pays indelible dividends. Pomerance’s writing is so densely clever, packed from stem to stern with sparkling and savage repartee, it almost demands to be read to fully savor it, but watching it onstage is a dizzying pleasure. Brian Sidney Bembridge’s shed set, the walls stuffed with thousands of dictionary notes, is splendid and appropriate. Bruno Louchouarn’s original music, a mixture of violin, guitar and percussion, adds a cinematic sweep to the show, and his sound design provides both aural setting and thematic cues for the characters, such as some softly jangling chimes representing James’ mental fragility.

Dianne K. Graebner’s costumes are lushly constructed if not flashy, and the British accents, abetted by dialect coach Tracy Winters, are pleasingly realistic. All of this talent comes together memorably in the final scene, in which the set pulls away to reveal a person walking through a bright landscape composed of small pieces of paper, a moment made for a standing ovation, and it gets one.