Some Cyclists Not Happy with Mayor's Bike Summit 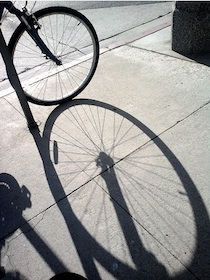 Photo by melissssaf via LAist Featured Photos on Flickr
Following a bicycle mishap that left Los Angeles Mayor Antonio Villaraigosa with a broken elbow, he announced that he would hold a bike summit, which is scheduled for Monday, August 16th from 9 to 11 a.m. But for some cyclist activists, the news is troubling.

"The Mayor's staff triple failed in this endeavor," Alex Thompson of Bikeside LA, and who sits on a LAPD bicycle advisory group, wrote in an e-mail detailing problems with the event. "Failure #1: The meeting takes place during the working day, making it impossible for many of the city's best bike advocates to attend. Had the mayor's office consulted with bike advocates ahead of time, it would have realized this."

Thompson's remaining two points are below, along with his conclusion are below:

However, the mayor's staff did not coordinate with members of the city's Bicycle Advisory Committee - the official body focused on bicycle issues in Los Angeles - failure #2. Members of this committee learned of the summit secondhand, from press.

A summit is a bringing together of the most powerful energies on an issue. By positioning the Mayor's staff as a daytime event that, by it's time alone, cannot attractive a huge share of the relevant parties, the Mayor's staff settled for third place. The Mayor's staff sent a clear signal by having a meeting at time that is convenient for city staff but impossible for advocates - city staff and their preferences will continue to take precedence.

The mayor would do well to move the meeting to a weekday evening, and show the existing bike community that he plans to work with them.

No one ever said cycling was easy in this town...