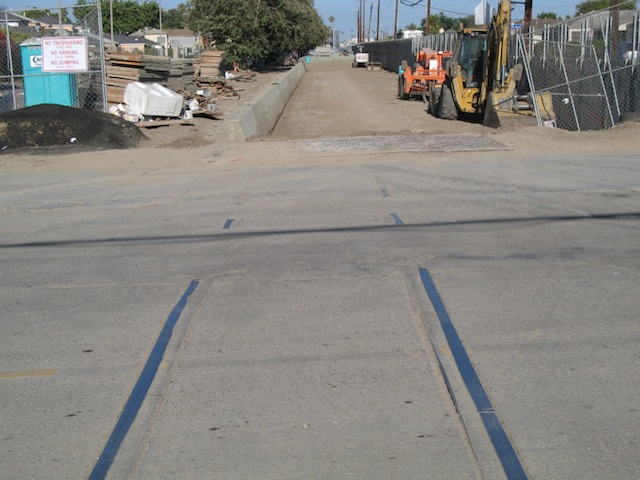 A recent photo at the crossing | Photo by Gökhan Esirgen

A controversial segment of the Expo Line today was put to rest when a state commission officially approved an at-grade crossing near Dorsey High School. Fierce opposition led to much discussion over the years about the street level crossing at Farmdale Avenue, which would have put trains running through the area at speeds that could have been dangerous for students.

The California Public Utilities Commission's decision (and compromise) allows for the desired at-grade crossing, but with a station that was not originally planned for. "The station will have near-side platforms on both sides of Farmdale Ave," explained a commission news release. "All trains approaching the crossing will stop at the station before entering the crossing, and upon leaving the station all trains will proceed through the crossing at speeds of no more than 15 mph."

Bart Reed of The Transit Coalition was happy with outcome. "I think that all told, even with the concerns of the opposition, the crossing became safer because of the varying parties working to get a safer approach," he said. "This crossing and the solution that came up was actually better to some of the prior decisions or suggestions."

Reed said a proposed pedestrian bridge would have also put students in danger, isolating them in a space ideal for crimes. Additionally, crossing guards will be posted at the crossing during school hours and the new station will be helpful for a pedestrian community that is home to many residents that live car-free.

[Update: But those leading the Fix Expo Rail Campaign were not happy with the idea last month. "It's the exact same proposal that was rejected by the CPUC last year, they just added a station," said the campaign's coordinator, Damien Goodmon in June. Reached by phone today, Goodmon said a statement about today's final decision would be released later. The campaign wanted tracks to either go underground or above the crossing.]