Where's the Sun this Summer? 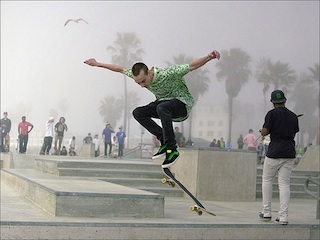 Venice | Photo by sirimiri via LAist Featured Photos on Flickr
As Summer goes, this hasn't been much of one. Temperatures have been cooler, clouds have been hanging above... this is June Gloom on extension. What's been happening iis that cooler ocean temperatures mixed with inland heat coming towards the coast has created a low and dense marine layer, according to the Daily Breeze.

Another reason the paper notes is "the lack of high pressure in the upper atmosphere that typically starts dominating weather during the summer on the West Coast, helping to keep marine air shallow and allowing it to burn off easier. That high pressure has moved east toward the southern plains, rather than lingering near the West Coast."

And while we'll have spurts of more desired Summer days, such as this coming weekend, Ken Clark, a meteorologist from Accuweather, predicts this to be a season-long trend.

"I've been here 31 years and have been through it all but this is the worst I can remember," said the owner of Jeffers Beach Rentals in Hermoa Beach. He's seen a 20% drop in business this Summer. "People aren't going into the ocean that much. The people visiting from hot places are relieved, but I'm apologetic for the cloudy weather. I love the sun."