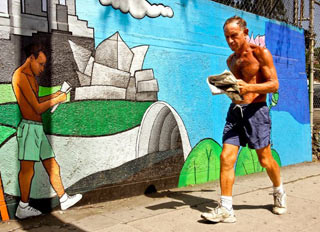 Abrams (Photo via Facebook)
Many knew Marc Abrams by sight, or by his "Walking Man" nickname, but to many he was Dr. Abrams, a general practitioner. Following his sudden death on Wednesday night, there has been an outpouring of grief from his many admirers in and around the Silver Lake community he called home for 30 years. However, a darker tale has come to light about the doctor, as reported by the LA Times.

Abrams had been under investigation in conjunction with "his treatment of a 25-year-old patient who overdosed on prescription drugs." The victim, Joseph Garcia, overdosed on Oxycontin with other drugs in his system in 2008, and his mother "filed a wrongful death claim against the doctor last year, alleging that he was professionally negligent in prescribing drugs that resulted in the overdose."

a series of undercover operations in which officers posing as patients were able to obtain powerful prescription drugs based on obviously questionable notes signed with names including "Dr. Kevorkian," "Dr. Pepper" and " Dr. Dre," according to a law enforcement official who requested anonymity because he was not authorized to speak publicly about the case.

Abrams kept nighttime office hours and "catered to nothing but addicts," the official added.

Abrams' lawyer says he believes the suit stems from a mother's grief, and that the blame is misdirected. The suit is likely to go on against Abrams' estate. At the time of his death this week, "no charges had been filed against Abrams." The doctor's death, however, "is being investigated as a potential suicide, according to the Los Angeles Police Department."

A memorial walk has been organized for Sunday, and some are calling for the path around the Silver Lake Reservoir to be named in Abrams' honor.