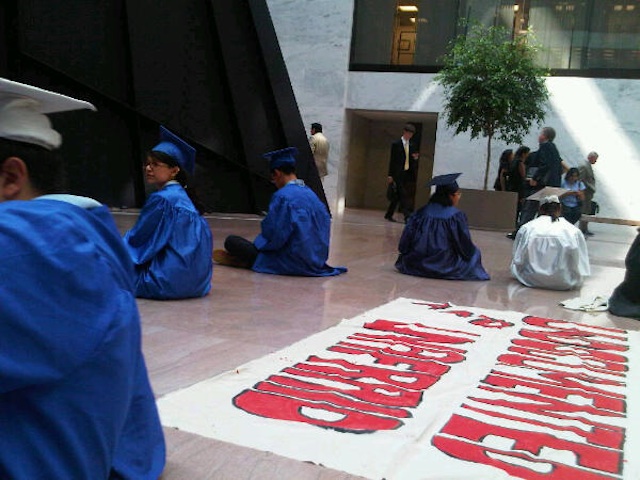 Protestors sit-in the lobby of the Hart Building in Washington D.C. The banner reads "Undocumented Unafraid" | Photo by theSoniaG via Twitter

About 20 undocumented youths today took to Washington D.C., staging sit-ins and risking arrest at various congressional offices, including California Senator Dianne Feinstein. It's the latest in a series of nationwide protests, such as back in May when a demonstration shut down Wilshire Boulevard, to urge the passing of the DREAM Act.

At least 65,000 undocumented immigrant youth graduate from high schools every year, according to estimates from protest organizers, which call their project The DREAM is Coming. They say the undocumented graduates have trouble attending college or joining the military. The DREAM Act, which was co-sponsored by Dianne Feinstein in 2003 and is still in committee, would grant youth who traveled to the United States before the age of 16 a path to citizenship contingent on continuous presence in the country, good behavior, and the attainment of at least a two-year university degree or a two-year commitment to the armed forces.

About six students demonstrated peacefully in Feinstein's office, said Gil Duran, the Senator's spokesperson. "She's been a strong supporter from the very beginning," he said, "therefore it's a bit curious for them to protest in the office of one of the strongest supporters, but we're willing to talk to anyone who comes through our doors."

But demonstrators, who acknowledge Feinstein's support, want action sooner than later. "We are urging Feinstein to champion the DREAM Act and move it out of the Judiciary Committee," said Nancy Meza of The DREAM is Coming. "Although she is a supporter we are urging her to be the champion our community's need"

Duran said the sit-in protesters eventually left the office, but were later arrested in the lobby area. A sit in at Feinstein's Westwood field office in May also led to arrests.

Students particiatping today came from all parts of the country. Representing California was Laura Lopez, a graduate of UC Santa Cruz with a B.A. in Latin American and Latino Studies. She aspires to be a lawyer, focusing on family law.