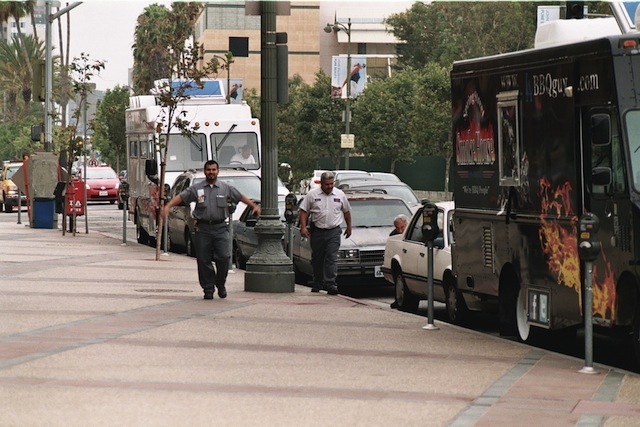 Each morning around 9 a.m., once anti-gridlock zone parking restrictions are lifted, food trucks and Museum Square workers are said to jockey for spaces along 5700 Wilshire. Food trucks do not park on the same side of Wilshire as Museum Square, which is home to a handful of restaurants. | Photo by Peggy Archer/LAist

A vehicle apparently used to block food trucks from parking on the 5700 block Wilshire Boulevard has garnered $800 worth of parking ticket fines over the last month, according to city documents. As of this afternoon, none were paid.

Of the 11 tickets listed, most of them are for parking at an expired meter. Two, however, are for parking in an anti grid lock zone, which costs $150 per ticket. An additional unpaid ticket stemmed from a parking violation in the Valley from January.

Since mid-June, employees from Museum Square have been trying to take all the parking spaces along the 5700 block of Wilshire Boulevard in an attempt to block food trucks from competing with restaurants that rent from the building. Museum Square officials will not comment on the issue and employees would only speak off the record. Around 10 vehicles are used daily, all which receive parking tickets.

Since last summer when the block became an unofficial lunch time food truck row, it has become ground zero for the conversation about food trucks parking near brick and mortar restaurants, which have suffered during the recession, but also from the added competition.

For background on the story, read LAist's full post on the issue here. You can also check out this humorous video that documents the parking war.