How the L.A. River was Saved 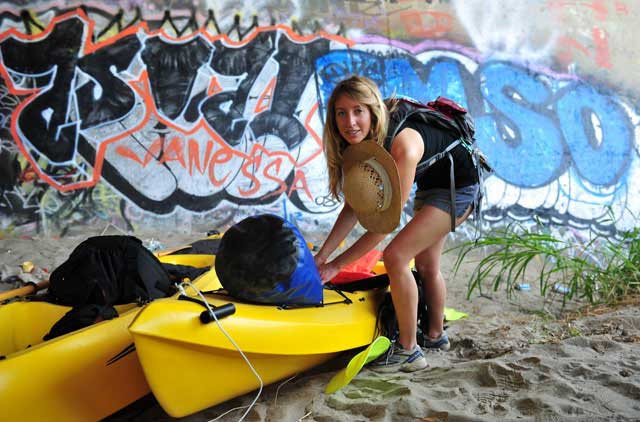 Photos of Heather Wylie on LAist led to trouble for her and her bosses, but they were also used in a federal document to support the L.A. River under the Clean Water Act | Photo by Tom Andrews/LAist

Sometimes a little civil disobedience goes a long way. When it was announced by the Environmental Protection Agency last week that the Los Angeles River was considered "traditional navigable waters," it meant that it and the streams and channels that flow into it are protected under the Clean Water Act.

What helped the EPA make their decision? A trip Heather Wylie instigated, which Hector Tobar at the LA Times writes about today. She then worked for the Army Corp of Engineers and became a whistleblower of sorts. Her bosses did not want to classify the L.A. River as navigable, but she leaked information to environmental law firms and also reached out to river activist George Wolfe.

Wylie, Wolfe and others wanted to prove a point -- yes, the river is navigable! It's not just a flood channel for what looks like sewage -- so they led to a three-day trip down the 51-mile river via kayak and canoe. That trip and photos by LAist's Tom Andrews were cited in the EPA's report that concluded that the river falls under the Clean Water Act.

The group got a film permit to gain access to the river, but it did not grant them into the waterway. Nonetheless, it was enough to get them by the LAPD and for them to finish their trip, albeit officially illegal.

Andrews stuck with the group the whole time, taking mind blowing photos that has many asking "this is Los Angeles?" And it was no doubt exciting for him (and us at LAist) to see a selection of them used in the EPA report (a big congrats to him!). To see those photos, check the three days out here, here and here.

Additionally, a documentary was also made.