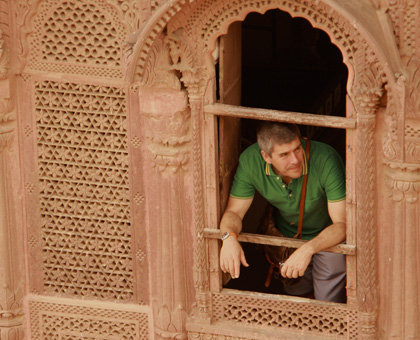 Keith Johnson's "Man Shops Globe" on Sundance has a new episode tonight
We're psyched to see one of our favorite people, Betty White, appearing on the season premiere of one of our favorite shows, "Community", this Fall. White will be playing a "somewhat unhinged" anthropology professor.
—-
Kudos: Starting in August, Christiane Amanpour will replace George Stephanopoulos on ABC's "This Week". It will be refreshing to have the very sharp Amanpour knocking around all the old white guys on Sunday mornings.
—-
TV on DVD: More like "movies on TV on DVD", we are of course, referring to TCM's ever expanding "Greatest Classic Films Collection" which now includes "Westerns" and "War". These collections include trailers and other promotional clips and sometimes commentary for each movie - "Westerns" includes The Stalking Moon (1968 with Gregory Peck, Eva Marie Saint, Robert Forster), Ride the High Country (1962, directed by Sam Peckinpah, with Randolph Scott, Joel McCrea, Mariette Hartley), Pat Garrett and BIlly the Kid (1973, directed by Sam Peckinpah, with James Coburn, Kris Kristofferson) and Chisum (1970, with John Wayne, Forrest Tucker, Christopher George) and it's a worthy collection, particularly if you are a Sam Peckinpah fan as there is commentary by a couple of his biographers, and pretty affordable at around $25.

"War" is composed of Battle of the Bulge (1965, with Henry Fonda, Robert Shaw, Robert Ryan), The Dawn Patrol (1938, with Errol Flynn, Basil Rathbone, David Niven), Gunga Din (1939, with ary Grant, Victor McLaglen, Douglas Fairbanks Jr.), and Operation Pacific (1951, with John Wayne, Patricia Neal, Ward Bond) and is probably the less valuable of the two sets as TCM seems to always have both Gunga Din and Operation Pacific in such heavy rotation that sometimes we find ourselves avoiding our favorite film refuge. Both sets have iconic performances that hold true across generations, they are well produced and look terrific but as with most collections of this type, you really have to make a decision based on wether or not you really want the specific movies included in them. Our take is that if there is just one movie per set that you are truly interested in, the price is right and you get 3 "bonus" movies. We look forward to seeing more from TCM in the near future.
—-
The TV Junkie Plan: "Top Chef", "Man Shops Globe", "Tosh.0", Letterman (Laurie Anderson?!), Fallon

8:00pm So You Think You Can Dance Fox - The top seven contestants perform two routines each.

10:00pm Psych USA - Shawn and Gus search for the abducted daughter of the leader of a Chinese Triad family.