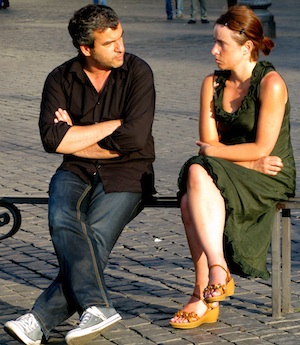 Photo by Ed Yourdon via Flickr
Watch out fans of divorce, it's back! After failing to qualify for the November 2nd ballot, the California Protection of Marriage Act went into circulation on Tuesday. If 694,354 registered voters sign the petition within 150 days — that's December 9th — California voters may end up voting on it in 2011.

ELIMINATES THE LAW ALLOWING MARRIED COUPLES TO DIVORCE. INITIATIVE CONSTITUTIONAL AMENDMENT. Changes the California Constitution to eliminate the ability of married couples to get divorced in California. Preserves the ability of married couples to seek an annulment. Summary of estimate by Legislative Analyst and Director of Finance of fiscal impact on state and local government: Savings to the state of up to hundreds of millions of dollars annually for support of the court system due to the elimination of divorce proceedings. (10-0019.)

Although hundreds of millions would be saved under the initiative, further state analysis predicts fewer marriages in California, thus possibly, "over time, result in a lower overall state population." It could also reduce the number of marriages, meaning fewer weddings resulting in less local spending at businesses affecting the tax base.

The initiative's author is John Marcotte, "who felt strongly that Prop 8 did not go far enough in protecting traditional marriage. With the help of attorneys and friends, Marcotte is attempting to ban divorce in the State of California," according to his website RescueMarriage.org.

In an open letter in early June, Marcotte announced he was going to try again and responded to criticism that he's abusing California's ballot-iniative system.

"The idea that I am abusing the system is absurd... The ballot initiative was designed to put power into the hands of the people, and that is exactly how we used it. We were doing it right—which is ultimately why we failed. If you want to see real abuse of the system, just look at your ballot on June 8th," he said, pointing to initiatives backed by Mercurty Insurance and utility powerhouse PG&E. "I am making my stand against cynicism. I’ve refiled my initiative to ban divorce. I’m prepping petitions and gathering volunteers. I’ve made it my goal to reclaim the ballot-initiative process for the people of California."