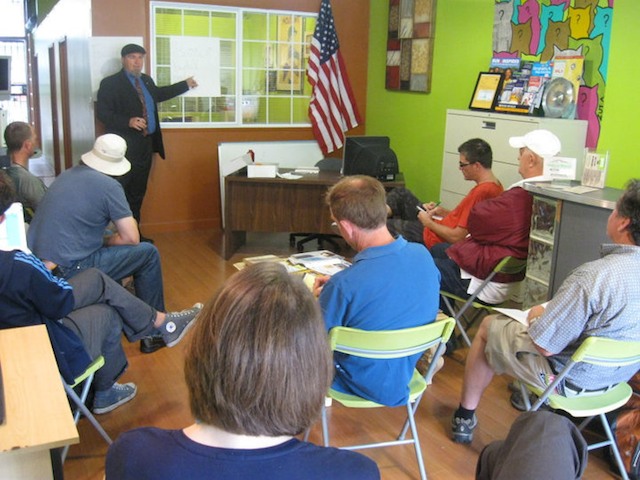 For an election in 2011, the announcement that community activist Stephen Box is running for the Los Angeles City Council has picked up a lot of steam already. In many ways — whether he planned to run or not — he's has been preparing for this moment for years. His name is out there as someone who has been constantly working to improve neighborhoods, as someone who can be a pain in the ass to officials at city hall (especially incumbent Councilmember Tom LaBonge) and as someone who has succeeded, whether good or bad, at changing Los Angeles.

In Monday's LAist post about Box, the comments section was rife with talk. Here are some snippets.

"Won't win. Won't even push the race to a run off," commented a skeptical trojan2002. "But at least he has the balls to run. LA City CLOWNcil is a cesspool, and I don't think a greenie can fight the machine that operates the cesspool."

"Trojan is right about the daunting challenge it is for anyone to go against a sitting City Council member," replied blogger Michael Higby of Mayor Sam. "Between the resources they get from the unions and the developers there is no one but to the little guy that candidates can go for support and that's one hell of a nut to crack. However it can be done with kilotons of elbow grease. This is how both Joel Wachs and Zev Yaroslavsky got their starts. Ruth Galanter and Laura Chick too. Though it would be a stretch to call him an outsider Paul Krekorian too won going up against the machine and with far less money but lots of hard work."

"Believe in grass roots, believe in real community members serving in local (or higher) office, hell even believe in pretty strict cyclist rights," prompted Paul. "That said, I would never ever vote for this petulant, short-sighted, and juvenile person."

"This is great, and I wish Stephen the best of luck. He is a tireless activist who believes in getting things done instead of just talking about it," said Gary Kavanagh, a blogger in Santa Monica. "Anyone who knows him personally knows that if you are in trouble he will drop what he is doing to help."

Rob Olague set the tone for what one of Box's campaign challenges will be: overcoming preconceptions that he's solely about cycling. "I've met this man. I'm not sure he's a politician, although that's a good or bad thing depending on how you look at it," he said. "On one hand, 'putting people first' to him may mean putting first the people with his same cycling/activist inclinations. On the other hand, I suppose that's far better than the current council who put their far more shady interests first."