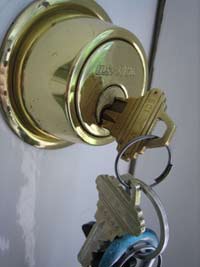 Photo by ewige via Flickr
While it's generally true that "there's no place like home," there's a problem when it's not your home anymore.

A 16-year-old boy got so intoxicated the other night that he stumbled into the Simi Valley home of Debbie Nate, stripped off his pants and shoes, and crawled into bed, according to abc7. "When I walked into the room, when police had secured the room, I could smell the alcohol. It was really, really strong and he was just out of it. He didn't know what was going on," explains Nate.

Nate contacted the authorities, who took the drunk and confused minor into custody. He "was arrested for trespassing, public intoxication and public nakedness," and then turned over to his parents.

The teen had used a key to enter the home, because up until 3 years ago, it had been his family home, and the subsequent owners had not changed the locks. Nate found a powerful lesson in the mishap: "You change your locks."