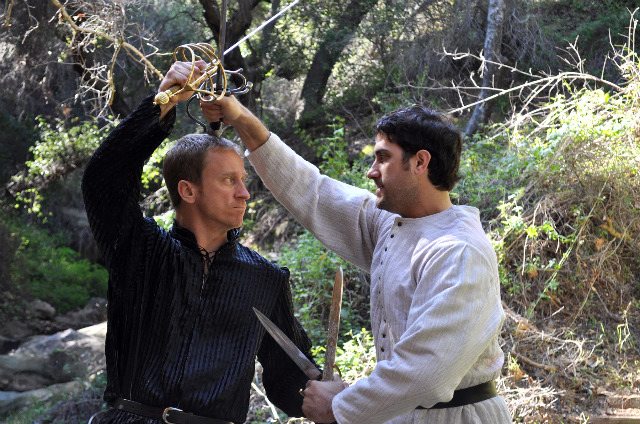 Mike Peebler and Jeff Wisen alternate in the title role. Each plays Laertes to the other's Hamlet | Photo by Ian Flanders

Alone, on a dark stage with just a symphony of crickets in support, Mike Peebler slowly intoned the most important soliloquy in the English language. "To be or not to be," he asked the audience, and, though most could recite the speech by heart, we waited breathlessly for the answer. So it went in Topanga Canyon one summer's eve, where Hamlet, a play performed so often it risks cliche, unfurled through two-plus hours on the strength of a splendid cast who played off each other to create a stirring quilt of a drama. And the good news? They're their all summer.

William Shakespeare wrote Hamlet about 400 years ago. Since that time, the great tragedy about murder and revenge has been performed approximately 2.5 million times, accompanied by about 1.83 million reviews. Though there is not much I can add in telling you about the play itself, there is much to be said about the superb performance at the Will Geer Theatricum Botanicum.

The performance was especially impressive given our ever shortening attention spans, adding an extra layer of difficulty to any production of Shakespeare, circa now. Obviously, the Bard's plays lack all manner of modern trimmings; there is no soundtrack, no explosive special effects and, with Hamlet being the longest tragedy in Shakespeare's portfolio, it seems a daunting task to grab an audiences attention.

But we were forced back to another era in Topanga, where imagination was key and props were special effects.

For example, the ghost of King Hamlet was draped in rags that hung loosely from his frame, creating a ghastly impact. His face was caked in white as he floated across the stage and up the stairs, through the audience. In other instances, characters ran through the woods above the wooden stage, using nature to create an unassuming picture of theatrical sincerity.

Some have tried to spin Shakespeare into modernity. While it works to varying degrees, the theater must stay true to its roots and perform Shakespeare as it was in the 1600s. And the rustic Theatricum Botanicum fits right in, sending you back to an era where a simple wooden stage is the cours du monde and actors must connect to the audience viscerally. 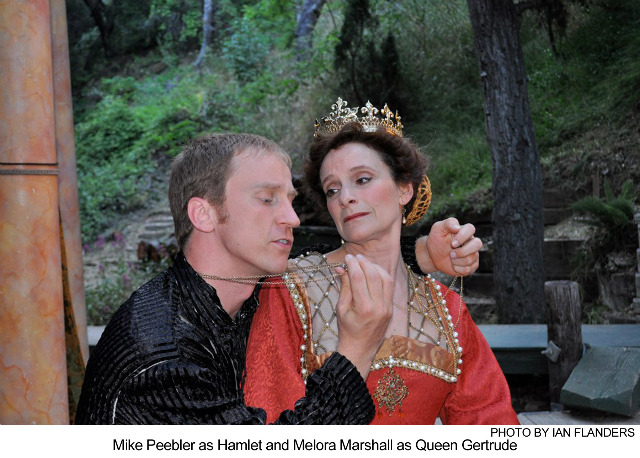 Nestled in the hills of Topanga Canyon, the Theatricum Botanicum is one of the jewels of Los Angeles, a shining example of outdoor theater. Set deep in Topanga Canyon, the theater was founded by Will Geer in the 1950's following a period of intense strife as a black listed actor during the Red Scare.

The Theatricum of fifty years ago bears little resemblance to today's digs, when Geer supposedly performed Shakespeare from the road with a rag-tag group of friends and actors, including Ford Rainey, John Randolph and Woody Guthrie.

Things have evolved in the last half-century. Audiences today sit bathed in the shade of hulking Oaks and Sycamores on wooden benches, feet from a wooden stage and miles from the din of noisy civilization. Actors routinely break the fourth wall in many performances, using the whole, 299-seat theater as a stage.

But, as with most performances of Hamlet, Theatricum's offering was a centralized treatise on its main character. As Hamlet, Peebler lacked the eloquence of a Kenneth Branagh and the presence of Mel Gibson, but he anchored the cast and repeatedly delivered stirring monologues that dutifully conveyed the proper emotions without wringing out the false sentimentality of melodrama.

For example, during the "To be or not to be..." soliloquy, a referendum on the pangs of modernity (no matter what era), Peebler was pitch-perfect, his tempo rising to the occasion and slowing for effect. His charisma drew us in, even while he spit fire at Ophelia. As one member of the audience said, "His sharp tongue swallowed me and my initial skepticism of [Peebler] drew me back into the world of Hamlet - the real fucking Hamlet, born out of the wits of Shakespeare."

And thus the crowd was reminded that outdoor theater is not dead, indeed is thriving in our own backyard. With a season that also includes A Midsummer Night's Dream, Angelenos will once again be able to experience the magic that only an ampitheatre (and not the fake kind) can provide.

Hamlet runs until October 2 at the Will Geer Theatricum Botanicum. For a complete schedule, click here.