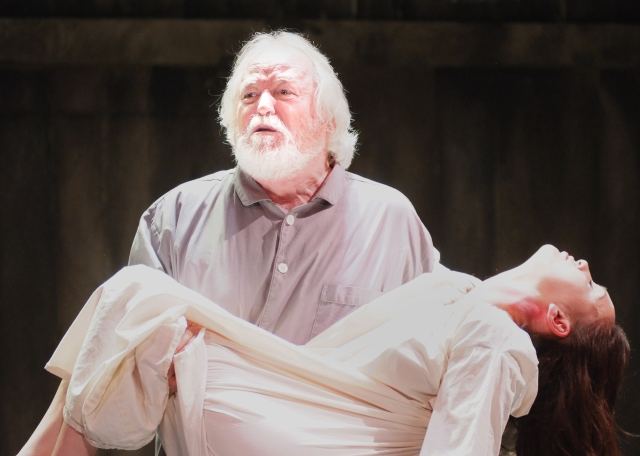 —by Terry Morgan for LAist

King Lear, Shakespeare’s play about an old, unfortunately unwise monarch who learns to value the worthwhile people in his life too late, is generally performed as a simple tragedy, squeezing pathos from the disconcerting velocity of the high being brought low. There’s nothing wrong with that approach—it works and has worked for centuries—but the new production by the Antaeus Company offers something different and equally compelling. Director Bart DeLorenzo and an expert cast (this production has two separate casts that perform alternately—this review only covers one of them) have done a deep reading of the text and the result is an intellectually engaging show that revels in the beauty and nuance of Shakespeare’s language and finds a plethora of unexpected humor. King Lear is funny—who knew?

As Lear, Dakin Matthews makes it clear that the king is not just the sad victim he is often portrayed as—his swollen ego values flattery over honesty, he rages intemperately, and in retirement, surrounded by his rowdy consort, he’s more like a drunken frat boy than the recent king of England. In other words, he is the initial cause of his own downfall, even if later he is indeed “more sinned against than sinner.” Matthews adds to the complexity of his performance as the imperfect monarch by finding humor nearly everywhere, from shaking a crown at Cordelia (Rebecca Mozo) as though offering a treat to a dog to flashes of sly wit underlying his scenes of madness. And yet he transitions this entertaining vigor with believable grace into Lear’s final fragility, creating a portrayal of the iconic Lear that is as affecting as it is accomplished.

Kirsten Potter is deliciously coldhearted as the bitchy Goneril, and Francia DiMase is the picture of flirty manipulation as her sister Regan. Mozo excels as Cordelia, particularly in the early scene where she has been brutally disowned by her father and she looks just gutted with shock and despair at how her life has so swiftly changed. Adrian LaTourelle brings a confident style to the sadistic Cornwall, and John DeMita impresses as the initially mild Albany who gradually reveals the righteous and moral man within. Morlan Higgins makes a gruff and reliable Kent, having fun with throwing a long litany of curses at the cowardly Oswald (an amoral, droll performance by Drew Doyle), and Norman Snow is memorably fine as the decent if misled Gloucester. Seamus Dever makes for a properly arrogant villain as Edmund, and conversely Ramón de Ocampo is convincingly heroic as Edgar—moreover, their climactic fight (choreographed by TJ Marchbank) is thrilling. Finally, Stephen Caffrey is terrific as the wise Fool, managing to make the jokes clear and funny to a modern audience, but also showing his ineluctable sorrow at the tragedy his master has set into motion.

DeLorenzo’s pacing is swift and his cuts well-chosen: There is no dead space in this production. He gets excellent work from his cast, giving equal attention to details big and small. The storm sequence, brought to booming life by John Zalewski’s audacious sound design and Lap Chi Chu’s brilliant lighting, is a showpiece, but a later sequence where the blind Gloucester is spotlighted reacting to all the sounds of a war being waged around him is even stronger in its impact. A. Jeffrey Schoenberg’s costumes are varied and elegant, uniform only in their high quality.