State Law Will Have Bicyclists Fined for Texting While Riding 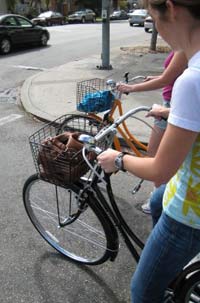 Photo by ubrayj02 via Flickr
It's against the law for people to communicate via text message on their cellphones while operating a motor vehicle, and now not only will the fines for drivers be doubles, but also cyclists are about to be subject to the same law, according to abc7.

A California bill "cleared an assembly committee Monday," that "at least doubles the fines for drivers caught in California calling or texting on a handheld cell phone. After court fees, the tab could be in the hundreds of dollars."

But new to the law is the inclusion of cyclists, who were "inadvertently left out" of the original legislation. Now they, too, will be subject to citation and a fine if they are found to be texting while on their bikes. The bike law differs in that the fines "will not include add-on fees or add a point to driving records," partially because juveniles riding bikes will be subject to the law.

Some cyclists already make sure that they abstain from distracting themselves with the phone will riding, whereas others believe it's so "common sense" to not text and ride that they are baffled why lawmakers would even bother with giving the issue attention. State Senator Joe Simitian (D-Palo Alto) finds the common sense in amending the law to cover everyone out on the road: "I think this is a common sense measure to make sure that we do what the law should have done in the first place, which is cover anybody who's out there on the highway," he said.