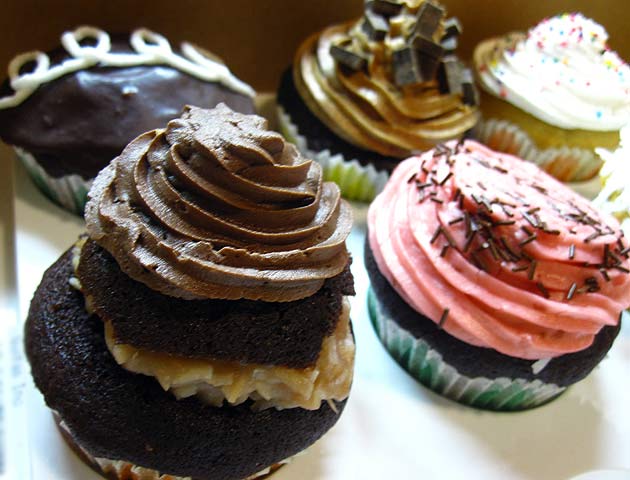 Can a cupcake that's made without butter, eggs, or chocolate even dream of competing head to head with one that's full of dairy?

This is the daunting conventional wisdom that local vegan chef Chloe Coscarelli faces in tonight's episode of the Food Network's Cupcake Wars, where she pits her animal product-free sweet treats against traditional cupcakes to see who emerges victorious.

Coscarelli, a vegan for the past five years, and a vegetarian since her middle school years before that, developed a love for cooking and baking vegan and veggie foods when she was a student at UC Berkeley, and honed her craft at New York's The Natural Gourmet Institute. Earlier this year she took the prize for her vegan panino at Brentwood's Coral Cafe Panini-Off, and now she is making a name for herself as a vegan baker.

The Cupcake Wars gig came when Coscarelli caught word on Twitter that the show was casting. "I tried out on a whim," she explains. "I wasn't even sure if the Food Network would cast a vegan baker, but sure enough, the producers called me back to say I made it! Times are a changing!"

On the show, and in her culinary life, Coscarelli wants to open people's eyes to the possibility that vegan sweets can be tasty and satisfying. "Many people think vegan desserts taste like cardboard, rubber, whole wheat, or nothing at all! This may have been true in old-school vegan cooking, but now the bar has been raised and there are so many great products and techniques that make vegan desserts just as moist and fluffy as those with dairy and eggs," Coscarelli says. 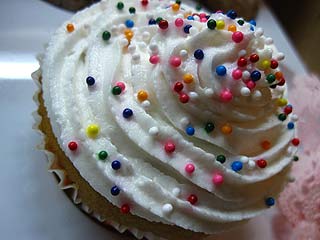 Yep, it's vegan! (Lindsay William-Ross/LAist)
Raising the bar herself by pitting her product against those packed with butter and eggs, Coscarelli knew she was in for a tough battle. "At first, it was daunting to be the only vegan on the show going up against traditional bakers with non-vegan cupcakes, but it was also really fun to have that added challenge," she describes. "I'm out to prove that vegan cupcakes can be decadent and delicious- I just had to hope that the judges would agree!"

It's not about trickery, though, assures Coscarelli. She says she's never tried to dupe anyone, but rather people take a look and then a taste of her treats, like her cupcakes, and assume they aren't vegan.

Coscarelli also encourages people to make their own vegan desserts at home to see for themselves how easy it can be to swap out animal-based ingredients for vegan ones with delicious results. She posts all her recipes online on her website, and contributes to VegNews.com. "If you're looking for an easy, delicious, healthy sweet-tooth-fix, don't be shy to try my recipes yourself," she urges. Besides, she explains, there's an added benefit to working without animal-based ingredients: "I think vegan baking is actually easier because you don't have to worry about creaming butter and cracking eggs. It's also more fun because it's safe to taste the batter along the way."

While Coscarelli is eying vegan ice cream as her next frontier, you can get a taste of her vegan treats--albeit just visually--tonight on Cupcake Wars, which airs at 9 p.m. on The Food Network. You can also follow her on Twitter.