It's Official: Griffith Park Grows by More than 100 Acres with Addition of Cahuenga Peak 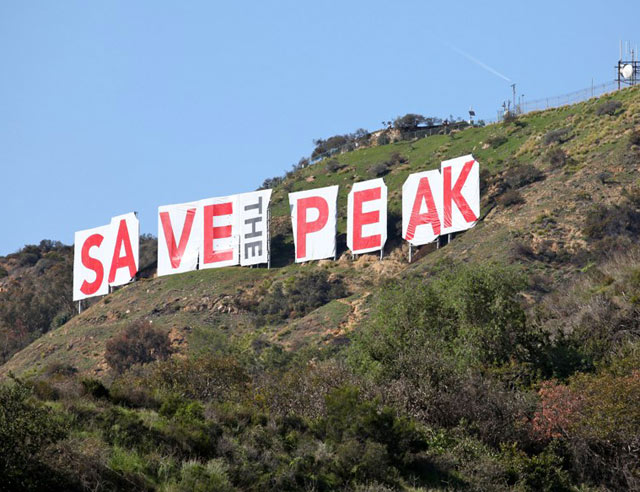 The Hollywood Sign, which is adjacent to Cahuenga Peak, was changed to raise awareness about the threatened land in February | Photo by therealquarrygirl via the LAist Featured Photos pool on Flickr

Thanks to the efforts of thousands of Angelenos (and a handful of big donors like Hugh Hefner and with the Trust for Public Land at the lead), the money battle to secure over 100 acres around Cahuenga Peak for parkland instead of development has been finalized. On Tuesday, the acquisition of the land went through and it's now under the ownership of the city of Los Angeles to be part of Griffith Park.

The land will soon open to the public after a large event with Councilmember Tom LaBonge, who represents the district and set aside $4.3 million in public park funding over the last eight years for this.

"This is a great day for all Angelenos, past, present and future,” LaBonge said. “This land is preserved in perpetuity for the hiking, exploring and enjoyment of the people of Los Angeles.”

The park, which was at 4210 acres in size, is now over 4310 acres. Los Angeles still has one of the lowest per capital park acreage among major U.S. cities at 4.2 acres of open space per 1000 residents.

Background Reading: Why the land was threatened