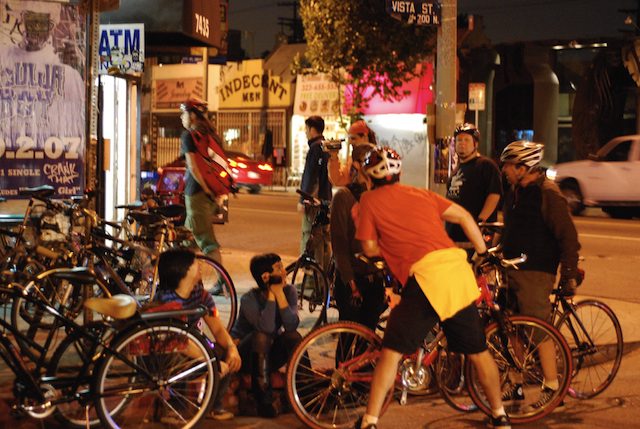 The face of Critical Mass in Los Angeles could change next week when the LAPD takes part. Yesterday, they announced to cyclists that they would join the June 25th ride. "The Department will support the rights of all persons to peacefully gather and bring attention to their cause," a flyer read. "LAPD officers will be present to ensure the safety of all those who lawfully participate and will take enforcement action against those who violate the law or the vehicle code."

Sgt. David Krumer, the LAPD's main bicycle liaison, said the move was based on cyclists asking the department at a recent meeting stemming from last months' Critical Mass where officers allegedly used force against cyclists for no reason. One of the incidents was caught on video and uploaded to YouTube. The videographer was apparently tackled and later filed a claim against the city. In response, an Internal Affairs investigation was launched and Chief Charlie Beck promised better police-cyclists relations.

Krumer says the LAPD still does not have a good strategy for large bike rides, so next week's ride will be both an opportunity to "facilitate the ride and discourage elements that are really taking advantage of Critical Mass for their own purposes."

Damien Newton at Streetsblog explains that "a group of bike thieves from Koreatown... would join rides starting in Mid-Wilshire and use the ride as an cover to vandalize, steal, and tag."

An action plan for how to handle intersections -- should cyclists cork, as in block traffic, intersections to let the group go through the red?-- still has not been developed. Police plan, however, to cite cyclists for riding on the wrong side of the road and will be on the lookout for drivers and cyclists conflicts, hoping to discourage any unlawful moves on either side. The LAPD video unit will be on scene to document the night so officers and cyclists can evaluate how it went. Krumer is emphasizing that this is a partnership.

As for this happening again, that's the plan. "It is currently our intent and plan for every Critical Mass ride here and out," said Krumer. And this is where major change to the ride could come, and it may not make some cyclists happy. With the LAPD's support, the event could make many others -- perhaps families? -- feel comfortable enough to try out Critical Mass, growing the number of riders and making this an ad hoc rolling cicLAvia. Adding to that, next week there are plans to hold a highly publicized press conference about it.

As the LAPD says in their flyer, "People come out for a variety of reasons: to assert their desire for cleaner air, less congestion, safer roads, more infrastructure, and to celebrate and ride in solidarity with other likeminded individuals."

Newton says the LAPD support puts "to rest the idea that Critical Mass and other group rides are somehow an illegal assemblage."

Krumer, however, warns that case law from a New York City Critical Mass court case could provide otherwise, but that's not the LAPD's goal. "We're trying to encourage people to do it in a responsible manner," he said. "We're hopeful that with partnership with the LAPD that something positive comes out of it. We'd hate to have an issue pushed and a new approach to happen, like permits, and then it stops it."

Los Angeles Critical Mass happens on the last Friday of every month at 7:30 p.m., starting above ground at the Metro Wilshire and Western stop.