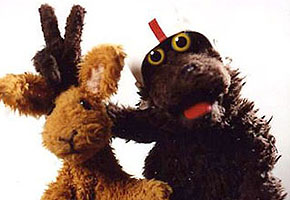 Warren the Ape has fled the clutches of Greg the Bunny and now has his own show which premieres tonight on MTV at 10:30pm
What a weekend. The sports events were pretty engaging but let's fast-forward to Sunday's "True Blood" premiere. What did you guys think? It was a no-holds-barred premiere as far as we could tell: vampire political intrigue, a bit of gore, and the typical sexy stuff found around Bon Temps. It was great to see our familiar friends and it was even better to see some good performances: in particular, Evan Rachel Wood vastly improved as Queen Sophie-Anne Leclerq and it was great to see a bit more of Kristin Bauer's Pam. We couldn't find anything wrong with it and we can tell you the next two episodes are similarly fantastic.
—-
After "True Blood" we staggered over to take in the "Breaking Bad" season finale and were blown away. "True Blood" is a guilty pleasure, the sexiest cartoon to ever come to life while "Breaking Bad" has such real characters with such life-or-death problems, we tend to get that feeling of dread in the pit of our stomachs - something that stayed with us until the very last second of last night's episode. Tellingly, we think that we can see the beginnings of season 4 a bit clearer than we could at the end of any other of their season finales.

On a related note, "Breaking Bad" showrunner Vince Gilligan was part of a roundtable held by the Hollywood Reporter - see the video embed at the end of this post or read the transcript to get some insight on the challenges showrunners face.
—-
Looking towards next Sunday's season finale of HBO's "Treme" we had an excellent setup in the penultimate episode last night. This is a pretty good show that captures the rambling and music-infused environment of a post-Katrina New Orleans. While some might feel that there's too much time spent on the various jam sessions, it would be difficult to separate the music theme from the multiple story threads. Regardless of the complicated story, there's been some great performances worthy of your attention from John Goodman (dude, lose some weight - we want you around for a long time and you're getting morbid), Kim Dickens, and Khandi Alexander, whom we just can't keep our eyes off of. We're definitely watching next week after last night's dramatic developments.
—-
"The Life And Times of Tim", formerly of HBO, is looking for a home for its 3rd season. Help out the series by signing up for their Facebook page and spreading the word. Without "Extras" or "Flight of the Conchords", it seems that HBO is now bereft of a show with the kind of confrontational humor that "The Life And Times of Tim" embodies - what a mistake.
—-
The TV Junkie Plan: Tour de Suissse, E3 2010, "The Good Guys", "Warren The Ape", "The Daily Show" (Betty White), Letterman, Ferguson.

8:00pm The Bachelorette ABC - The remaining men participate in a makeover and magazine photo shoot; seven of the bachelors audition for a Broadway musical; Joshua Radin and the Harlem Boys Choir perform; two more men are eliminated.

8:00pm Lie to Me Fox - Lightman and Foster have to revisit events in their past after a car bomb kills one of Cal's former colleagues.

9:00pm Last Comic Standing NBC - The search for comics continues with auditions and a comedy showcase in New York.

9:00pm Neighbors From Hell TBS - Balthazor joins his boss on a golf outing, while the family struggles to fit in with the humans.

9:00pm The Good Guys Fox - A case involving a damaged vending machine leads Jack and Dan to a grisly murder and a high-class prostitution ring.

10:00pm Saving Grace TNT - Grace is consumed with feelings of guilt after a tragic event; the squad investigates a case involving a beheading

10:00pm Persons Unknown NBC - Moira removes the device that was embedded in each person's thigh; McNair and Joe test the limits of the invisible fence