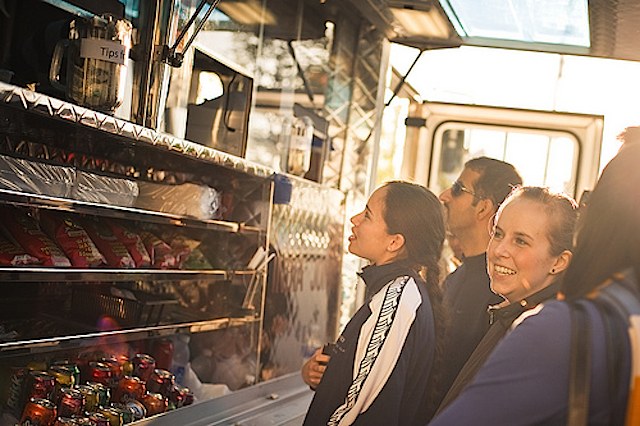 Photo by strph via LAist Featured Photos on Flickr

On Friday, Councilmember Tom LaBonge proposed two motions to limit how food trucks operate in Los Angeles and it didn't take long before a movement went afoot to stop him. Food trucks today are asking followers to Facebook-like a page called Los Angelinos Against Labonge, which describes him as a "friend of the celebrity, foe of the small businessman."

LaBonge, who represents the portion of Wilshire Boulevard where food trucks and businesses compete daily for the lunch crowds, wants city staff to study what other cities have done and to come up with regulations. One idea he has is to create "specially designated parking zones for catering trucks."

"I believe in the broken windows concept," he explained to Scott Mason at OpenLine in January. "I believe streets should be clean and should be nice for pedestrians to walk in. I believe shops should have cafes so you can sit outside and have a variety of food. I don't necessarily believe there should be a two hour period where lunch trucks are sitting out there."

LaBonge said he was fine if trucks were on private parking lots but said parking spaces were created for parking, not commerce. Trucks should also only stop at construction sites for 20 minutes or so, he explained.