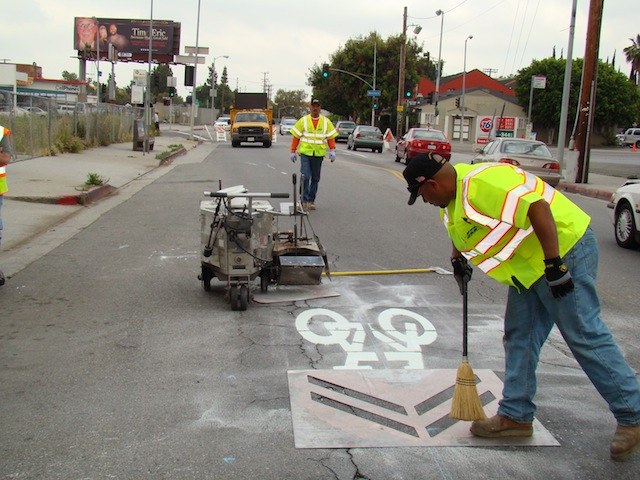 A big step for cycling in Los Angeles may end up being yet another challenge within city hall. Cycling activist Stephen Box says the city's first sharrows that were installed last Friday are misplaced. He says the sharrows' positioning can put cyclist in the door zone, indicate that the narrow lane is sharable and teaches drivers they can share the lane when there is no room for traveling side by side.

"It establishes a standard for mediocrity that sets the course for the implementation of future engineering innovations," explained Box on why he believes this blunder to be significant. If Box is right, the city is in at least the position of doing sharrows correctly the next time around because this is part of an ongoing pilot project with more sharrows to come to city streets in coming weeks.

Whether you agree with him or not, Box does nicely sum up how L.A. bureaucracy has a price. "When Hermosa Beach put down their Sharrows, they spend about $2K," he said. "When Los Angeles put down three times as many Sharrows, it took an estimated budget of $100K."

Damien Newton at Streetsblog compares it to Long Beach where "it took four weeks for Long Beach to move their award-winning green Sharrowed lanes from [city bicycle coordinator] Charles Gandy's head to the street."

Continues Box: "All that money spent on research and planning and preparation and implementation and yet the LADOT Bikeways failed to accomplish the three goals of a Sharrow. (Get cyclists out of the door zone, position cyclists in the center of a non-sharable lane, communicate clearly to motorists the correct position of a cyclist on a narrow lane)."