Studying in Resistance: Students at CSULA Set Up Guerilla Library for Finals Week 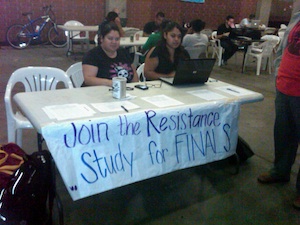 Photo by U2Baja via Twitpic
It's not just the Los Angeles Public LIbraries that are facing budget cuts, forcing reduced hours, but libraries across the region. At California State University, Los Angeles (CSULA), students were put into a bind when officials shortened hours from midnight to 8 p.m. That's bad news, but what makes it worse is that it was finals week.

So a group called The Colektiva on June 1st decided to take it upon themselves to set up their own, called The People's Library that came complete with copier, printer and free coffee. Organizers say school officials initially shut off electricity and threatened arrests, but agreements were come to after safety concerns were addressed, according to the LA Times.

Last night was the end of the library, as finals concluded, but it's just another form or protest that we've seen over the past year regarding state funding of the CSU and UC systems.