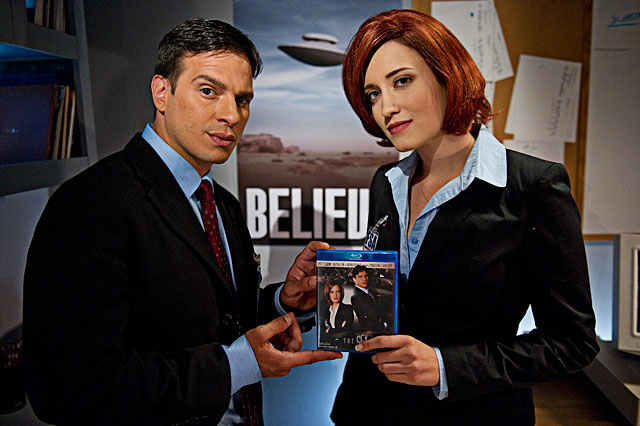 When LAist favorite Kimberly Kane won Best Actress (AVN, XBIZ, and XRCO) earlier this year for her portrayal of FBI Special Agent Dana Scully in The Sex Files: A Dark XXX Parody, it was a good omen for her reprisal of the award-winning role with Anthony Rosano as Fox Mulder in the sequel, reuniting with director Sam Hain as well as Lee Roy Myers. Filmed last month in five days at a San Fernando Valley soundstage as well as the High Desert, this movie is chronically a prequel to the original, delving into The X-Files' epic alien conspiracy mythology and featuring the debuts of the Cigarette Smoking Man, Alex Krycek, Diana Fowley, Marita Covarrubias, and The Lone Gunmen. Hain has said that if a third Sex Files is produced, it will deal with the alien invasion in 2012, as mentioned in The X-Files series finale "The Truth".