Mayor Gets the Message Out that Texting While Driving is Illegal 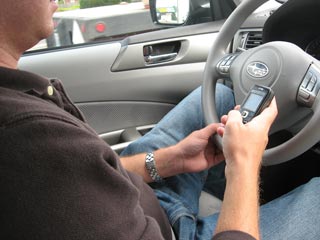 Photo by mrJasonWeaver via Flickr
He might not have to worry about himself, but Mayor Antonio Villaraigosa wants to make sure Angelenos don't break the law when it comes to their cellphones. Yesterday at a news conference, Villaraigosa voiced his support for the movement to make sure drivers don't send text messages while they're behind the wheel, reports the Daily News.

Villaraigosa acknowledged that he isn't the one in the driver's seat these days, so he can text all he wants from the limo's passenger seat: "It seems funny to have me saying this. Everyone knows I never drive around myself anymore. But it's an important message to get out."

LAPD Chief Charlie Beck was on hand to remind everyone that his officers have been instructed to enforce the state law that prohibits drivers from texting while operating their vehicle. Also there was an AT&T official, who was there to remind everyone to keep texting—that's not illegal!—but not to do so when driving.