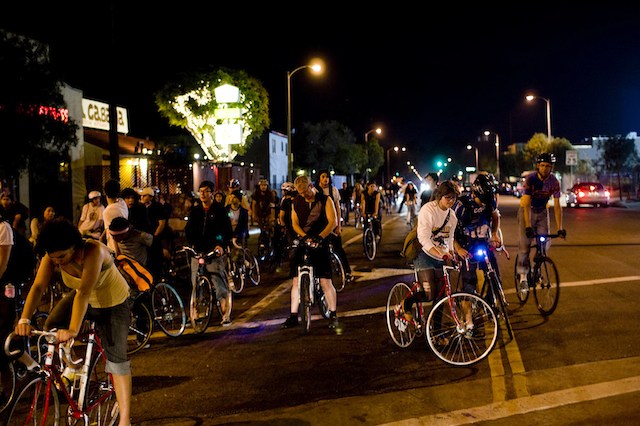 A Critical Mass event in Venice | Photo by alexbcthompson via Flickr

Relationships between cyclists and the LAPD cannot improve if police continually tackle cyclists for running red lights. Fresh from a recent Critical Mass ride in which several cyclists were reportedly tackled — one of them caught on tape — it looks like the LAPD is listening

"We need to work on policy on how to stop a cyclist," said Jeremy Grant of BikesideLA at a bicycle meeting last week Tuesday. "We need to work on a policy of handcuffing — they do not handcuff motorists who cruise through a red light making a left turn. Do they flip their car over? No they don't."

An internal memo between LAPD's Office of Operations and Training Division shows that the issue is on a path to resolution. "Numerous current events have highlighted the need to develop and implement effective tactics in handling bicyclists," the June 4th letter from Commander Jorge Villegas. Continued:

The Office of Operations is requesting Training Division to develop tactics for officers assigned to foot beat, bike motorcycle or car assignemtns to do the following:

As LAPD Chief Beck says, "police work by nature will have conflict, and it's not whether they occur or not, it's how you resolve them." It appears this is what he was talking about.