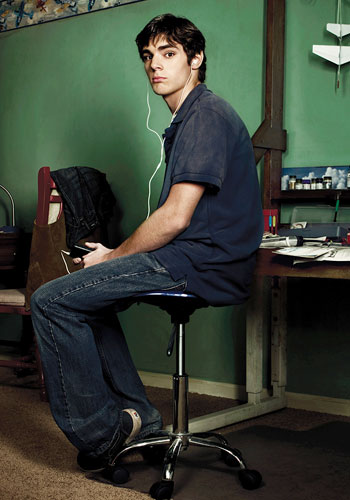 RJ Mitte play Walt Jr. on AMC's "Breaking Bad". Part 1 of the two-part season finale airs tonight at 10pm.
RJ Mitte plays Walt Jr., the son of former chemistry teacher now crystal meth wizard Walter White in AMC's "Breaking Bad". The critically acclaimed show will have the first of it's season 3 ending two-part finale air tonight at 10pm. Despite the role of Walt Jr. being his first major role as a series regular, the articulate and mature RJ (he's only 17!) is incredibly aware of the effort that goes into his show and the privilege of working with and for multi-Emmy winning cast, writers, and crew.

This season we've seen the always-inspired Walt Jr. assert himself more by standing up to his mother Skyler (Anna Gunn) for kicking out his Dad as well as become a supporter of his Uncle Hank (Dean Norris) who needs it as he struggles in the hospital after a dramatic shootout with the Terminator-like "Cousins" a couple weeks ago. It's been another watershed season for the series and we can tell you that tonight's episode features some incredible twists and turns - you won't believe the ending.
——
TheTVJunkie: The "Breaking Bad Writers" seem like people who "put it all out there" with no reservations. Sometimes while watching the show it seems impossible that there could be another episode, much less another season, because of the extremes that the characters go through. That's the outside perspective, what's it like on the inside?

RJ Mitte: It everything you said and more. [series creator] Vince (Gilligan) and the whole writing team play the show like it was real life. They put so much thought into everything each character does but they let things work out in their own way, the show has its own life, the way it falls together you can't foresee so they let things transpire naturally.

TheTVJunkie: It sometimes feels that within the season that there's no way out - how could there be an episode next week after what we just saw? From your experience throughout the seasons, was there an episode that was particularly memorable for you in terms of either your performance, is there one that stands out for you?

RJ Mitte: In [last week's] episode, there is an amazing scene where Dean Norris gave the performance of his life. What he is doing is amazing. You saw this big change in him in that episode, it was definitely an eye-opener, you see how Walt Jr. has grown up and how everything has affected him, and you see the repercussions of what has happened to him.

TheTVJunkie: We've spoken with Dean Norris and he is incredibly modest. He's taken this character who was kind of a joke of a DEA agent to the very complicated man we now see struggling with a life-changing situation.

RJ Mitte: He is an amazing guy. We have an amazing cast and crew and everyone has their own level of what they bring to the show. They're all on top of their game and ability. Working with Dean and Betsy, Aaron, and Bryan and Anna has been just phenomenal. Dean has done so much with this character - to see Hank go from something of a joke to something so serious, it's been a privilege to be present for such a transformation.

TheTVJunkie: We've seen your character, Walt Jr., go through so much this season. There was a plateau when your character's dad, Walt, had his cancer go into remission but there was no real joy associated with it. This season, your silence in the dialogue with the parents of your character speaks volumes, much more than paragraphs of words could ever do.

RJ Mitte: The people I work with are the ones that make me look good. It's been so intense to see what Walt Jr. has gone through. What's scary is that this has happened to people in real life.

TheTVJunkie: The tension in the family is so palpable and real. You guys really pull it off. Certainly there are scenes where one's heart rate goes up because there's a lot of action going on, but I feel my heart rate and blood pressure rise every time Walt, Walt Jr. and Sklyer sit down for a meal.

RJ Mitte: We have a joke about that, every scene where we have a dinner, or mostly breakfast actually, we have to prepare for a rough scene. There's only been one time that there's been a decent breakfast on "Breaking Bad".

TheTVJunkie: Have there been some characters in the series that you would have liked to have had scenes with?

RJ Mitte: I've always wanted to have a scene with Aaron [Aaron Paul aka Jesse Pinkman], that would be fun. Gus [Giancarlo Esposito aka Gustavo 'Gus' Frings aka The Chicken Man] and I finally had our scene together, which I thought was pretty cool. But I'd really like Walt Jr. and Jesse to meet.

TheTVJunkie: That's interesting because Jesse is something like Walt's surrogate son, he's someone who Walt spends more time with than he does your character.

RJ Mitte: It's going to be really interesting when those two finally meet! I really hope it happens.

Part one of the "Breaking Bad" season finale airs tonight at 10pm on AMC.